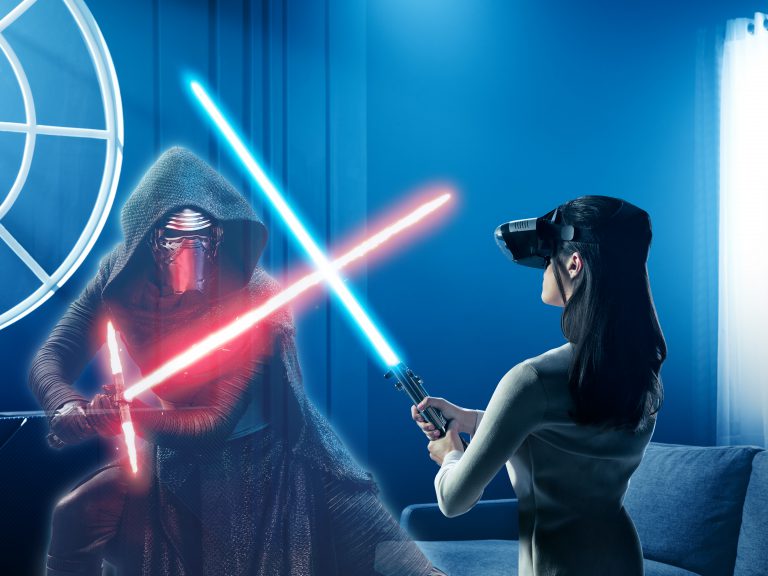 If you still think that mobile phones are not a proper gaming device you are wrong. The new Star Wars: Jedi Challenges takes your VR/AR compatible smartphone to a new level.

It has augmented reality to fulfil your childhood dreams of becoming a Jedi. You can activate your lightsaber and fend off Sith Lords. You will soon be dodging, blocking and attacking as you jump around the Star Wars galaxy.

The lightsaber battle is the highlight of Star Wars: Jedi Challenges

But wait there is more. Two other game modes are quite intriguing.

It is a great take on the basics of real-time strategy games such as Age of Empires. You can re-create battles by commanding your troops from a bird’s-eye view where your room is the battlefield. You can watch your troops battle it out against the Empire completing mini-missions such as getting droids safely into their X-Wings.

The other game mode is called Holochess. It is the relaxing part of the game but is still wonderfully entertaining. Having a giant chessboard appear in your room that you can walk around is entertainment enough.

But the best part is the animations. Based upon the same chess game played in Star Wars: Episode IV – A New Hope, the units that you place on the board will attack the opponent, each having their health, attack strength, special abilities and movement distances.

Lenovo and Disney have released their first multiplayer experience for Star Wars: Jedi Challenges. It is called Lightsaber Versus Mode. The free update allows you and a friend for the first time, to play lightsaber duels simultaneously. The great thing is you can see each other’s lightsaber in AR.

Each player must have the smartphone-powered Lenovo Mirage AR headset, Lightsaber Controller, Tracking Beacon and a compatible smartphone – to face off in AR lightsaber battles, while in the same room and have the latest version of Star Wars: Jedi Challenges.

I am excited. Each player has their own (lightsaber, headset, tracking device and mobile device). It is not too expensive either. Lenovo has recently cut the price in half from the $399 to the current $199. A definite starter.

The multiplayer experience revolves around the Lightsaber Battles game mode in which you can battle a friend in a one-on-one to determine who is the better Jedi.

As much as I do love this game, the headset is pretty heavy! Luckily the game absorbs you into becoming a Jedi that you forget about it most of the time. Best advice – don’t play in long shifts.

The Lightsaber wanders off centre a fair bit. But the re-centre button on the controller is in a perfect ‘thumb’ position when you need it. The dodging mechanism takes some time to get used to as well, but practice makes perfect.

GadgetGamer’s take – incredibly worth it

If you can get past these few minor issues, the $199 price tag that this game has is incredibly worth it.

The new Han Solo movie comes out later this month. There is no better time to get your hands on Star Wars: Jedi Challenges from Lenovo, JB Hi-Fi or Harvey Norman now. The app is free to download from the App Store or Google Play Store and quite honestly if you haven’t played this game yet, you are missing out big time.

May the Fourth be with you!