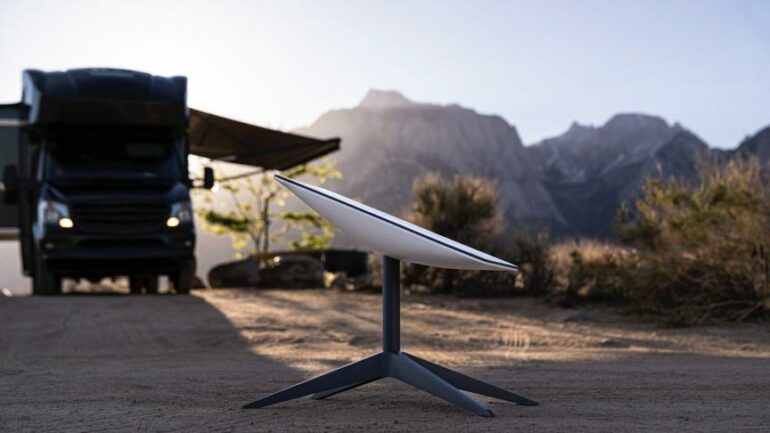 Starlink, the satellite-based internet company owned by Elon Musk, has just announced a new service for RVs. Previously, you needed to register a fixed address to have a Starlink account and hardware and you were only guaranteed service at that address. Now, Starlink roaming has been switched on. Assuming your Starlink hardware is within the coverage area, you can have high-speed internet at different locations as you travel.

With the new service, touring or working in remote areas of Australia is now possible with much faster download speeds than even a cable-based NBN connection at home. Now you really can work from anywhere in Australia with high-speed, low latency connectivity.

Where does Starlink roaming work in Australia?

In just this past week, SpaceX has launched 3 rockets, each carrying 53 satellites. This takes the number of Starlink satellites in orbit to over 2400. The final number is expected to be around 12,000 satellites. As of May 2022, coverage is available in Australia, south of Geraldton in the west and south of Bundaberg in the east. All of New Zealand is covered. As you would expect, with so many new satellites being launched, coverage will increase quickly.

Your Starlink satellite dish must have a clear view of the sky, and trees, buildings, hills etc., will block reception. The satellites are moving, not stationary, so the dish will constantly readjust itself to keep a connection.

Note that Starlink is still building out its network of moving satellites. Thus expect interruptions to the service, especially if you do not have a 360-degree uninhibited view of the sky. With more satellites, we expect more tolerance for locations with trees and objects in the way.

How can I use Starlink for remote travel?

Although you can find videos on YouTube of people managing to get Starlink internet coverage in a moving vehicle, the current offer is designed to offer reception while stationary.

To sign up, you need to visit the Starlink website and register your interest and provide your location. If they can support the capacity in your location, you will immediately go through to payment, after which you will be sent your hardware. According to Australian forums, this takes around 2 weeks on average.

Starlink is a self setup arrangement, although many companies will do the installation for a fee.

If remote travelling, you could set up a bracket on your vehicle, caravan or motorhome, where you would attach your dish when stationary and remove when on the move. However, it would appear that most people are simply placing the dish on the ground and running a cable back to their vehicle/caravan.

Once the unit is powered, it finds satellites and uses a supplied router for you to connect to via Wi-Fi. Netflix in the middle of the Simpson desert, no problems!

One small issue – we have heard rumblings that Foxtel Now is blocked when using Starlink as the internet connection is interpreted as coming from a different country.

How does Starlink compare to other internet options?

In a recent GadgetGuy post, Caravanner’s guide to connecting to the internet anywhere, we covered the basics of remote internet access options. This post showed that Starlink was superior from a download speed and response perspective, plus you get unlimited data. But how does Starlink compare from a cost point of view?

We will assume that you are constantly changing location, so that rules out the NBN’s Sky Muster since it does not support roaming.

Many Australians in outback areas have struggled to get high-speed internet which StarLink solves. For Australia’s grey nomads and travellers, this provides a superior solution that will allow remote schooling or work from anywhere.

As each month goes by, more satellites come online, improving coverage, capacity, and reliability. We also expect to see a truly mobile solution soon with access available from your moving vehicle in any part of Australia you wish to roam.