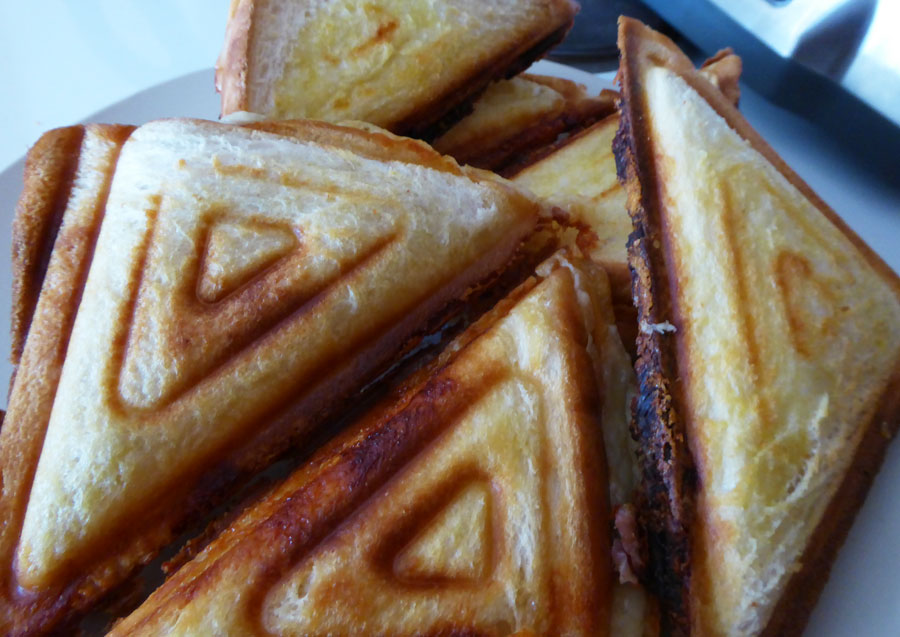 Toasties are about as Australian as it gets, and Sunbeam’s Big Fill aims to let you pack more into not just a single Toasties, but four, cutting off eight triangles at once and cooking them in a matter of minutes. Hungry yet?

You can call it lots of things: a jaffle or pie iron, deep sandwich press or sandwich toaster, and you can even call it a toastie, which is likely the name most Australian know it by.

However you know it, we can all come to the same agreement that the toastie is a delightful pressing of cooked filling between two slices of bread, basically turning the otherwise dry regular sandwich into a hot meal that you can take with you.

Sunbeam’s Big Fill Toastie is a machine made just for  this, which its name should indicate.

The casing for the Big Fill is made of plastic, while the inside appears to be metal, coated in a non-stick surface.

Even with this coating, it’s highly suggested that you butter the outsides of the bread before cooking, not just to help remove it from the iron plates, but also to better cook the bread.

Sunbeam’s recesses for the sandwiches are apparently deeper, eating into the plastic casing of the machine a touch more than competing machines, with a raised diagonal on each side that cuts the sandwich into two triangles when the top half clamps down shut on the sandwiches and starts to cook them.

The machine won’t switch off automatically, and has to be unplugged to be turned off.

Heated sandwich presses aren’t often big news, but when they’re designed to take more filling, we feel compelled to check them out, especially when that often means our bellies are going to receive a filling while we’re working.

Sunbeam’s Big Fill aims to help us out in this department by offering space for four toasties at once, cutting it into eight triangles and sealing all that yummy goodness inside. If that’s cheese, ham, and tomato, great, but Sunbeam’s Big Fill isn’t named arbitrarily, catering to around 50 percent more filling compared with the smaller units we’ve all traditionally owned.

Looking at the unit, you’d never realise that Sunbeam was doing anything differently, that is until you open it up.

When you do, you’ll find slightly larger cavities for the larger bread we have today, as well as recesses that go further down, so when the top half comes down on the bread, it will force the bread and fillings into these large sections in both sections, providing plenty of room for the toasties.

Like most toastie makers, the action of pulling the top half of the press down will also cut the bread down in half, which is where most of the effort comes in when you’re closing the toastie maker for the first time.

So does it work?

We went to work in the GadgetGuy kitchen, crafting several jaffles with ham, prosciutto, pepperoni, and a variety of cheeses, and can happily report back that yes, yes it does work.

Switching the Sunbeam Big Fill on, you’ll find a warm-up time of only a few minutes, waiting for the ready light to come on, and have you load your creations on each slot before pulling down that top half, which will cut the bread and start cooking the outside and middles.

Once done, the small plastic latch closes around the handle, holding the top and bottom halves together, cooking the food inside.

While we were able to pack a fair amount of fillings in, it is worth noting that the larger recesses won’t support all bread sizes, and larger loaves — particularly the artisanal bread, or large slabs of rye or sourdough — won’t match the square sizes, which are slightly bigger than what you might have at home.

This tells us the Big Fill has been designed more with regular white bread in mind, and since that generally works well, we’d advise sticking with that.

After around three minutes, we checked on the toasties, opening them up to half done pressed sandwich, and closed it back, waiting for another two minutes.

At a total of five minutes, though, the toasties were mostly that — toast — so we unlatched the handle and opened the machine to see our lovely toast-based pies waiting for us, their insides all hot and gooey and ready to be consumed.

Removing the finished toasties was easy enough: simply grab a spatula or something with a flat surface and remove them from the cavities, prying the pieces apart that have been cut in two from the diagonal of the cooking plates.

Clean-up is also easy, thanks in part to the non-stick coating, which allowed us to wipe excess cheese or filling away and into a small towel, thrown away after this.

One thing we’d have appreciated would be a power switch, and not have Sunbeam’s jaffle maker rely on the tried and trusted method of simply unplugging the appliance just to turn it off.

Sure, that works, and we totally get it. This is probably one of those “if it ain’t broke, don’t fix it” things, but since most appliances come with a switch these days, or even a cut-off timer, and since these elements are a pretty basic form of technology, we’d really like to see it in an appliance like a sandwich press.

Many of us have sandwich presses that have either been on their last legs for a while, or were bought for a tenner at the local supermarket, and have been doing us fine. Sunbeam’s Big Fill 4 isn’t that appliance, though, bringing with it a slightly deeper toasted sandwich for people who want that sort of thing, and want to do four at once.

With a recommended retail price of $69.95, it’s the sort of purchase we’d recommend if you really love this great Australian classic feed, since it won’t just let you get more done at once, it will let you pack more in, and if you’re hungry, that’s a big deal for a small meal.

Overall
Reader Rating0 Votes
Warms up very quickly; You can pack a reasonable amount in the toastie maker; Plastic closing switch latches in place very quickly once you close it;
No on/off switch; Doesn't automatically switch off when unused; Not all bread fits perfectly;
4