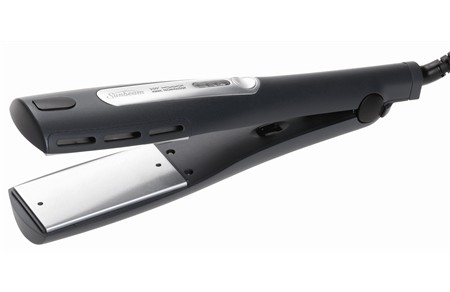 The Sunbeam Salon Technique Wet to Dry Straightener with Ionic Technology (model WD5810) can be conveniently used to straighten either wet or dry hair. Combining ceramic plates and ionic technology it is designed to reduce frizz and static, creating shiny, straight locks. It’s good for straightening thicker, longer hair. If you are styling shorter hair you can buy the slimline version which retails for $30 less.

The Wet to Dry Straightener with Ionic Technology features a good looking brushed stainless finish. It also has a LED temperature control that can be adjusted to ensure the correct temperature is used for the hair’s thickness.

Upon first glance this wet to dry straightener appears to have an elegant streamlined design. The unit’s housing is a deep grey with silver highlights around areas including the variable temperature control. Its ceramic plates make it very easy to use on your hair for drying and straightening.

Like all wet to straight hair straighteners I’ve tested, when you place it on your hair you will hear a hissing sound as the steam escapes. This is initially alarming but simply indicates your hair is drying.

This model has a built-in ionic generator which automatically produces a constant stream of negative ions when the styler is switched on. The ion indicator light (which is inside the straightener) lights up while the styler is in use.

For safety there’s an auto off feature which switches it off after approximately 45 minutes. This is a great addition, for peace of mind. After 44 minutes, the LED flashes to indicate that you have one minute of styling left before the appliance switches itself off. If you want to style for a longer period simply switch the unit back on again.

You can easily wipe the ceramic plates and the outside of the styler with a soft cloth once it has cooled down but you are advised not to wrap the cord around the styler when not in use and it can be stored in a dry place.

It also has a swivel cord for ease of movement and the cord is nice and long (three metres), great if you like to move around while you are straightening. It also has a locking mechanism which means you can safely store it and keep the plates free of dirt and debris. It doesn’t come with a bag or a heatproof mat, though, which is a shame, considering its $129.95 RRP asking price, and similar models I’ve reviewed offered some kind of heat protection mat or storage solution.

Its rounded design means it won’t sit upright on your benchtop which makes it a bit clumsier than other models I’ve tested.

I found the styler reasonably comfortable to hold yet because its streamlined body seemed to be both a benefit and a disadvantage. It looks great, but during straightening I frequently found my hand slipping up and down the styler, accidentally accessing the variable temperature control switch. I kept switching the styler on and off and managed to overheat my fingers with steam when my hand slipped too close to the steam vents.

The variable temperature settings also confused me: while straightening, I couldn’t remember if setting 1 was high or low, for example, so I switched it off instead of changing the temperature to a lower setting. Apart from these hiccups the straightener did a neat job of straightening my hair and the plates glided across my hair seamlessly.

While I think this straightener’s ionic technology delivers a great straightening experience on wet hair its design is disappointing. A re-think of the variable temperature controls would make this product much more enjoyable to use.