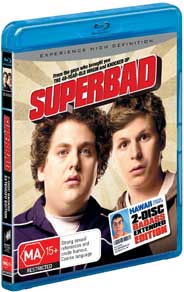 There seems to be no end to the American obsession with getting your end away before you graduate from high school and, in that respect, Superbad chimes in as just one more rather pathetic teenage sex-fixation ‘romp’ borrowing heavily from the American Pie school of thought for its laughs.

But one element does elevate the whole sorry affair above the usual run of such movies, and that’s the relationship between Seth and Evan, two charmingly realistic school buddies who have spent virtually every moment together at high school now faced with the prospect of going their separate ways.

These two, with the addition of Fogell (hilariously played by Christopher Mintz-Plasse) as he assumes his hilarious ‘McLovin’ alter ego, bring oodles of character to the very simplistic ‘plot’ of acquiring alcohol for a party to assist them in their quest to bed some classmates. If you’re 16, there’ll probably be resonance in this movie.

For anyone else, the voyeurism associated with watching desperate teenagers is entertaining for a while but, really, isn’t it about time you forgot about high school and moved on?