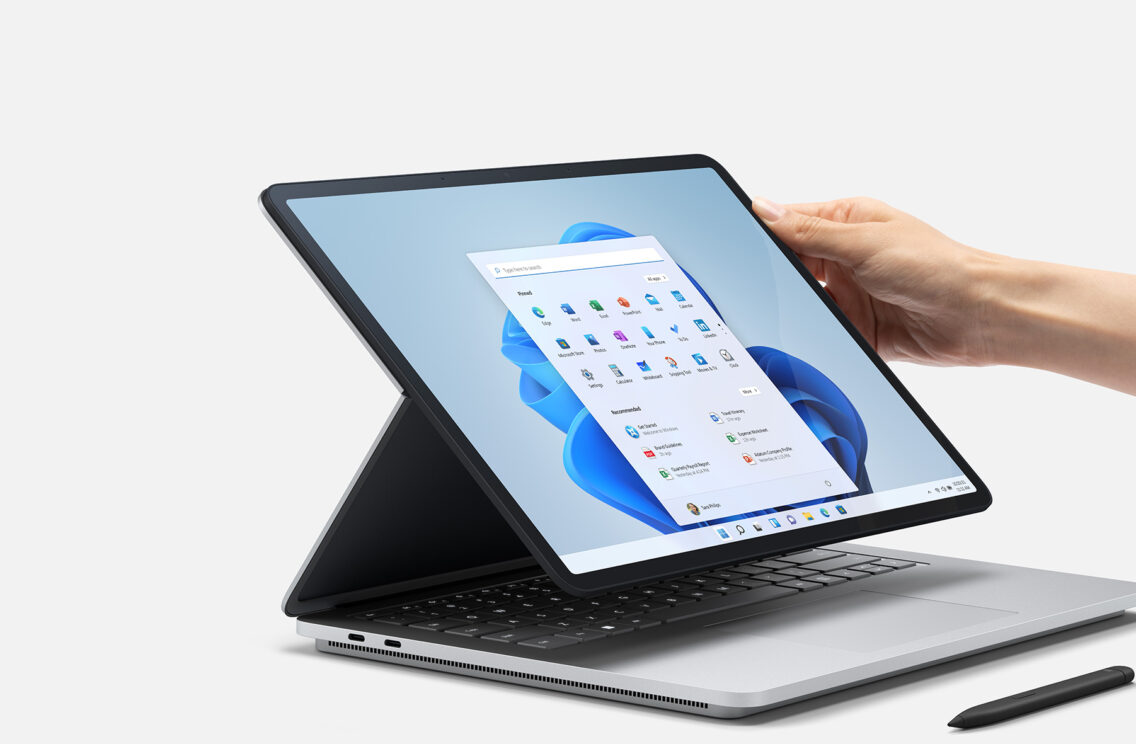 Microsoft’s Surface line is known for daring new hardware designs that shake up the PC market. Whether it’s the detachable keyboard of the Surface Pro, removing the screen entirely with the Surface Book or the unique folding hinge design of the Surface Studio, the brand has become synonymous with giving its users the flexibility to work how they choose.

At first glance, the Surface Laptop Studio could be mistaken for Apple’s MacBook Pro with its metal grey exterior, rounded corners and chiclet-style keyboard with a large one-piece trackpad.

The haptic trackpad, where the click feedback is generated by a motor under the pad, feels just as good as Apple’s. Similarly, the keyboard is very nice to type on with comfortably spaced keys and just the right amount of travel.

With a flick of the wrist, the display can be brought forward and magnetically attached right above the trackpad, allowing it to be used as a comfortably angled tablet for movies or presentations. Microsoft calls this position ‘stage mode’ and I found this particularly useful for watching content on a cramped aeroplane tray table.

Pull the screen even further toward the device’s base and it will rest entirely flat on top of the keyboard. This ‘tablet mode’ is ideal for note-taking with the Surface Pen.

The Laptop Studio’s hinge design is nothing new. Other PC makers such as VAIO and HP beat Microsoft to the punch years ago and Acer uses a similar hinge for its ConceptD Ezel range.

Acer’s implementation is a bit more versatile as the screen can hang in the air at any angle while the Laptop Studio is restricted to the three aforementioned positions, secured by very strong magnets. For example, you have to reach and bend the top half of the screen backward until the magnets holding the bottom half release to bring it closer.

I initially found detaching the screen a little tricky as the magnets were a bit too strong, which caused an abrupt release, but this eased out a bit after a couple of weeks.

Still, you’ll need to use two hands to release the screen and there’s no way to avoid fingerprints when changing positions. Thankfully, the palm rejection is good enough to keep accidental presses at bay.

Windows is smart enough to know what posture the device is in so it will automatically bring up an onscreen keyboard when in tablet or stage mode and disappear when in traditional laptop mode.

At 1.8kg, the Laptop Studio makes for one heavy and bulky tablet. While it works great when resting on a table and using the Pen for drawing or writing, you’re not going to want to use it in place of a lightweight tablet for reading in bed.

The Laptop Studio almost looks like it’s floating on a table thanks to a narrow rim around the top perimeter that creates a gap between the bottom of the machine and the surface it sits on. It serves a practical purpose in that it houses the fan vents and speaker grilles as well as a spot to magnetically stow away the Surface Pen.

The Laptop Studio includes a limited selection of ports with a pair of Thunderbolt 4 ports, a headphone jack, and a Surface Connect port. The laptop’s primary charger is a 102 Watt brick that uses the Surface Connect port, though USB-C chargers and monitors can also charge the laptop. The lack of an onboard SD card reader in particular seems like a significant oversight for a laptop geared towards creators, however.

The display is a 14.4-inch 2400 x 1600 screen with narrow bezels. Like other Surface devices, the screen uses a 3:2 aspect ratio, creating extra vertical space for photos and documents.

What sets the Laptop Studio’s display apart from other premium laptops is that it supports a fast 120Hz refresh rate, which is something we normally see confined to gaming laptops. The higher refresh rate provides much smoother scrolling, better touch interactions and reduced latency with pen input.

At around 500nits, the screen is nice and bright, holding up quite well outdoors. There’s even support for HDR and Dolby Vision, giving compatible content on Netflix a bit of extra pop.

The four speakers on the Laptop Studio sound excellent with punchy and room filling sound that outperforms the majority of other notebooks on the market.

With the display set to the default 120Hz refresh rate, I would get around 7.5 hours of runtime with typical use. Meanwhile, streaming video at 50 percent screen brightness clocked in at ten hours.

It’s worth noting that dynamic refresh rate is not yet supported in Windows 11, which means the display is running at 120Hz all the time irrespective of what is on the screen. The update is expected to land soon and when that happens we should see further improvement to the battery life, as this would allow the screen to automatically change its refresh rate based on what you’re doing.

When it comes to performance, the Laptop Studio is a mixed bag. My review unit is the $3,149 top spec model equipped with a Core i7-11370H quad-core processor and Nvidia GeForce RTX 3050 Ti graphics chip. It sails through every day work and complex image-editing as expected.

It’s not until you start comparing to the competition where the Laptop Studio starts to feel underpowered for the price. For example, the likes of the Dell XPS 15, Lenovo ThinkPad X1 Extreme and Razer Blade 14 all come with much more powerful 8-core processors, which is critical for developers and content creators looking to compile mountains of code, process large 3D models and convert and render video.

The ThinkPad X1 Extreme and Blade 14 also have more powerful GPUs for significantly better gaming performance. As it stands, the Laptop Studio isn’t capable of running the latest titles at the display’s native resolution and refresh rate even if you elect to use the lowest graphical settings.

Dropping the resolution to 1920 x 1440 yielded 30fps with demanding titles like Metro Exodus, Shadow of the Tomb Raider and Forza Horizon 5 running in medium graphical settings.

It’s a shame that Microsoft didn’t opt for the same RTX 3060 GPU as the competition, which would’ve almost doubled the performance. It doesn’t seem unreasonable given the case design should have room for cooling higher-end components.

The Laptop Studio also doesn’t support GSync or FreeSync monitors as external displays are connected to the integrated Intel GPU rather than the discrete Nvidia GPU.

On the upside, the Laptop Studio remained noticeably quieter than other gaming laptops, even under full load.

On the video conferencing front, the 2MP front facing camera is a noticeable step down in clarity and doesn’t handle varying lighting conditions as well as the stellar 5MP webcams found on other Surface computers.

The Surface Laptop Studio is a beautiful machine that is a joy to use even if it isn’t the fastest thing you can buy for the money. Transitioning between the modes feels well engineered, and watching movies, drawing or taking notes with the Surface Pen a pleasing experience.

However, you are paying a premium for the added flexibility, so if you don’t really need a screen that moves in unique ways, then there are other more potent laptops on the market that will do the job for the same amount of money.

Other laptop news and reviews on GadgetGuy

Microsoft Surface Laptop Studio
The Surface Laptop Studio is a beautiful machine that is a joy to use even if it isn't the fastest thing you can buy for the money
Features
8
Value for money
7.5
Performance
7
Ease of use
8.5
Design
9
Positives
Stellar hardware design
Flexible screen positions
Gorgeous high resolution display with buttery smooth 120Hz refresh rate
Large haptic trackpad is a dream to use
Excellent Pen support
Negatives
Midrange performance
Heavy and bulky to use as a tablet
Surface Pen not included
Limited port selection
Average webcam
8