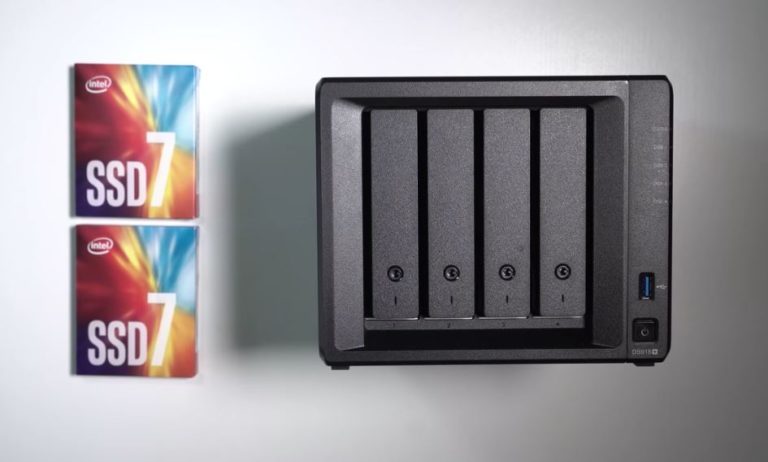 The Synology DS918+ (2019) is a four-bay, network-attached storage device supplemented by up to two M.2 PCIe NVMe caches – the result is around 116MBps sequential read/ over a 1Gb Ethernet LAN. Double that if you use LAN aggregation.

I suspect you are asking why you need network-attached storage (NAS), let alone a Synology 918+. The answer at the basic level is it is a local ‘cloud’ storage using up to four hard disks (4 x 16TB or nine with an expansion module). It is capable of doing so much more that I only touched the surface in this review.

And the other confusing thing is what the hell is a Synology DS918+? Synology makes dozens of NAS types so I would suggest you head to its NAS selector and let your fingers do the walking.

The Synology NAS selector reveals some interesting issues to consider, and unfortunately, they are not in layman’s terms.

The Synology DS918+ sits above our previously reviewed DS418Play as both have 4K transcoding. If you did not need that the NAS selector would recommend a lower-specified and hence lower cost unit.

We wanted to review this because of the M.2 PCIe NVMe slots and the impact on file transfers.

Just think of it as a big bucket of reliable storage. Reliable in that it can (and should) use RAID. In layman’s terms, it uses two/four drives as if they were one/two and if one goes down you can hot-swap (pull it out while it’s on) and replace it, and the RAID will rebuild without losing files.

For a small business, it sits in the corner quietly gathering valuable data, and when there is a fire, you can pick it up and go! Or it can automatically synchronise to the cloud – even better for said fire.

It can host your WordPress web and email server. It can enable password protected file and folder access to staff, clients and suppliers. Think of it as your own DropBox.

Or a photography studio may use it to store bulky RAW photos. It’s even fast enough to edit them on although its internal speed is about 200MBps compared to a PCIe NVMe at over 3000MBps.

Or a home enthusiast could store their audio and video libraries on it. While it will transcode 4K video, you may just use it as a DLNA server and let the display device do that.

There are so many tools for this that its best you have a look.

Download Synology Assistant which finds the device and then installs DiskStation Manager (DSM).

I won’t go into that in-depth, but the primary advantage of a Synology NAS is its turnkey nature. As long as you have a modicum of home networking IP knowledge, then you can set it up. Or there are tens of thousands of geeks out there that know Synology Disk Station Manager and can make it hum in a very short time.

A common use is to hook up to 40 IP cameras (2 free) and use it for video security.

What is special about the Synology DS918+?

The two M.2 slots use PCIe NVMe as high-speed cache – regrettably, not as standard storage devices like you do as the 3.5″ drives.

The typical file sizes you use dictates the minimum cache. I recommend putting in a 1TB anyway and if you start to get slowdown of larger files throw in another.

Essentially the cache allows for more efficient use of the lower-cost SATA 6 hard disks. Where it really comes into play is for repeated use where the files are already cached – it can be up to 90% faster. And it can extend hard disk drive life as they dont have to work as hard.

We achieved 116MBps sequential read/write over a 1Gbps Ethernet connection (this is the maximum you can get over that). When we added a second connection, we achieved nearly double that. Some Synology NAS devices have 10Gbps LAN connections, but your router needs to support that.

It has two USB 3.0 ports (one front and back) that lets you connect external hard drives, printers, and even Wi-Fi adapters. You can get 100MBps data transfer over USB 3.0 as well.

There is also a proprietary eSata connector that can add Synology’s five-bay expansion DX517 unit. We have not tested this, but it should support those drives via a 6Gbps (600MBps) connection. Again the cache will cover those drives.

Noise and heat depends on the drives you use. Dedicated NAS drives like the Seagate Iron Wolf will be quietest, generate less heat and use less power. We do not recommend desktop drives because they are not for 24/7/365 use.

With four drives, we measured <40dB at the rear of the twin 92mm fans.

We measured approx. 50Wh use, regardless of load or idle. I guess NAS needs to be always on.

We need to clarify that the NAS can do transcode 4K video to 1080p or lower streams that can go over 1Gbps (100MBps) LAN. It does not have an HMDI or DP output for direct-to-TV multimedia. It does support HDR and Atmos sound streams. If you are considering it for 4K, then read this.

What the means is that you don’t have to use a separate software codec or player. For multi-media use, you would be best just using it as a network DLNA drive and letting the 4K TV do the decoding.

Sorry if this review is not too techy because it is all about letting readers know that small business and home enthusiasts that store a lot of data can but a good quality NAS with cache for a reasonable price.

When I was providing tech support, I installed several Synology NAS into networks, and the user response was profound. “Where did that file go?” or “Love that auto backup and sync.”

There are lots of NAS brands, but Synology stands out as a no-nonsense design with a very high number of aficionados who can make it sing.