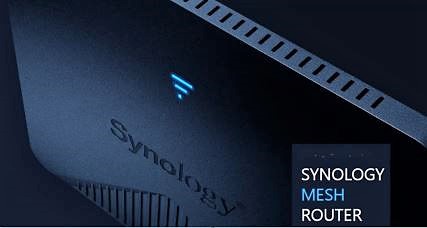 The Synology MR2200AC Mesh tri-band router has a difficult task ahead. Convincing me that tri-band mesh delivers enough bandwidth to cover a typical Australian home. Or to put it positively what is it best at?

Perhaps it was my disappointment with the coverage area and speed of dual-band mesh routers like the NETGEAR Orbi, Google Router and D-Link -C1203 (the best of an average lot) that I wrote a Mesh Tutorial. It saves readers from making expensive mistakes. Let’s see how the Synology MR2200AC Mesh tri-band Wi-Fi Router fares.

Mesh 101 – or why it is hard to convince me of the value of mesh in a typical Aussie, 3-4 bed, single or dual level home.

Wi-Fi signals transmit in a circular ‘dinner plate’ coverage with the signal strongest at the centre where the main router is. It gets weaker as it moves out to the edges (5GHz/2.4GHz line-of-sight is 30-100m, but in a home, it is typically 10-30m).

Mesh needs to overlap those dinner plates to get a strong enough signal to retransmit. Placing a mesh repeater at the edge of a dinner plate only lets it transmit the weakest signal. Mesh cannot turn a bad signal into a good one! We usually find that a mesh slave needs to be no further than 7-10 metres from a master router.

The term ‘mesh’ only relates to routing – communication with the main router. Each slave unit handles retransmission of whatever signal it can get over 2.4GHz, and 5GHz Wi-Fi bands then send it back to the main router via the backchannel.

Dual-band mesh equates to a two-way road. If an ambulance needs to get through you all pull over to the sides and stop! If heavy users want bandwidth for streaming or games, these are not up to the task.

Tri-band mesh is a two-way road with a service lane so if even if there is congestion on the two-lanes things can go around and get through.

Router placement is key to performance

There is no substitute for the correct placement of the router. Unfortunately, most routers hide away in the wrong places like utility cupboards, under stairs etc. If the main router is in the wrong location mesh will not improve it.

The main router (Mesh or not) must be at the nexus where most smart devices are – not where your NBN (or steam-driven ADSL) connection terminates in the house. If the two locations do not correspond, get a sparky to lay an Ethernet cable between the two and place the main router where it must be! I repeat, this is inalienable and just finding the right position will fix 90% of all issues.

So, the main router needs to be within a few metres of most of your PCs, smart TV/Blu-ray/Set-top-box/soundbar/and smart home hub. Most of these devices must connect via a full-duplex Ethernet Switch/hub to the router LAN port leaving Wi-Fi clear for portable devices like smartphones, smart speakers, lights, IoT, laptops and tablets.

The right router for the job

If you have a small one-bed apartment and perhaps ten Wi-Fi or Ethernet devices then you can get away with AC2200 and a small routers processing power.

If you have more devices or a larger area to cover then moving to AC3200 to AC5600 (currently the fastest) with lots of processing power and multiple antennae makes sense. But, you still have the limitations of the dinner plate transmit area 10-30metres.

The best whole of home Wi-Fi coverage (in my opinion) is the fastest AC5300 router (more like a V8 supercar) as a base station and range extenders (or access points) using Ethernet cable or Ethernet over Power Powerline Adaptors.

Because I have yet to see a mesh router perform over the coverage area claimed.

And, don’t forget the internet. It is the router’s job to share that precious resource among all users and devices.

But, to be very fair there is a lot of load balancing, time slicing, packetizing, and magic going on to give the routers the best possible speeds under all loads.

It uses a Qualcomm IPQ4019, processor with 8MB RAM, 245MB storage, 2 x 2 antenna and +MU-MIMO. Power is from a 12V/2A adapter that will fit a standard width power point. Ten points for that – too many power take up adjoining slots.

Given our experience with routers, we would say its fine for a typical 60-80m2 one-bedroom apartment with ten or so Wi-Fi/Ethernet devices. To use a motoring analogy, it is a four-cylinder car so don’t try and tow a caravan.

But, you can add extra Synology MR2200AC routers and use one of the 5GHz bands as a mesh backchannel between them. This can extend the range and offer some internet access. Extra routers use the same SSID and password for seamless roaming

You can also use two or more of these to mesh with a more powerful Synology RT2600AC router (more like a six-cylinder car). It has 4x Ethernet Ports, Dual WAN Ports, eight antennae, bandwidth aggregation and HT160 support – think of it as about half the speed of an AC5300 router but able to do so much more than the MR2200AC router.

Synology MR2200AC claims coverage of 185m2 which is a circular area of about 13.6 x 13.6 metres. While Synology is not lying the practicality is that

Next are the satellite routers.

As they are the same Synology MR2200AC, they cover 185m2 – in theory a total of 370m2. The reality is that they need a strong overlapping signal to get an effective backchannel. In our tests we found 7-10 metres away gave three/two band signal strength respectively. What that means is effective non-overlapping square metre coverage is around 160-250m2.

The satellite is just another MR2200AC router set to Access Point mode. Top points to Synology for that – it makes sense to have all that CPU power even if it is a little costlier than a dumb access point.

Using our D-Link DLR-895 AC5300 reference router and a Samsung Galaxy Note9 with a high gain antenna capable of HT160 speeds (over the 5Gbps, 866Gbps limit)

* Our analytics software show the satellite connecting at 340Mbps to the main router. So, real upload/download link speeds are at best half those shown. This can be misleading – you think you have 866Mbps. When using AV2 2000 Gigabit Ethernet Powerline the backchannel was more than 800Mbps full-duplex.

The satellites need to be within 7-10 metres line-of-site of the master to get reasonable backchannel speeds.

For example, in the middle of a home with satellites up and down a hallway. We could not test daisy chaining, e.g. Master to Satellite to Satellite as we only had two units but remember it will only be as effective as the backchannel bandwidth to the Master.

Under all other circumstances use Ethernet and Powerline adaptors to connect satellites. We say that because while the MR2200AC are more powerful than the typical master/slave mesh combo and offer better upload/download speeds, they still need a good backchannel.

Still, in our home the AC5300 does have black spots and Mesh will get some signal, even if it is a slower 2.4Ghz one, into those spots.

While I am yet to be convinced about ‘mesh over might’ the Synology works well, the app is good and in the right place would deliver a signal (any signal is better than none) further than a stand-alone AC 5300 router. From what I read it delivers more power than the master/slave combos some other brands sell.

If I were a single or dual level apartment or townhouse, had no more typical ten connected devices and could not install Ethernet cables then yes – it makes sense!

With due respect to Synology however, it will not work for me as I have 30+ devices in my home network and the D-Link AC5300 has the horsepower to handle that.

Just as Synology can get two or more standard routers working in a mesh, I suspect we will see a lot more whole-of-home solutions using the IEEE 802.11s mesh standard.

And, do not forget that Wi-Fi 6 (AX) is coming with speeds of 6000 to 11000. Sure, this will be costly, but they have the power to support ever-growing networks.

So in the right place, it’s a winner.  And, don’t forget if you can use Ethernet to connect them it offers AC2200 experience off each router.

We rate it as an AC2200 router under perfect mesh conditions.

Synology sells via local computer stores. Expect to pay around $220 each or a little less per unit in a multi-bundle.

Features
Value for money
Performance
Ease of Use
Design
Reader Rating0 Votes
Good in the right places - covers blind spots that an AC5300 can’t reach
SRM 1.2 app is easy to use and provides analytics for those that understand them
Trust Synology to keep software updated (it is good like that)
Well-made and easy to set up
Uses the same device as a router or a satellite – good but a little more expensive
USB 3.1 Gen 1 5Gbps port for NAS like storage support
Bad in the wrong places
Price for three units would lead me to an AC5300 plus range extenders
Limited to the back-channel speed achievable between routers
Only one LAN and WAN ports and no Ethernet Link aggregation
Does not support IEEE standard to work with other brands (very few do)
4.1