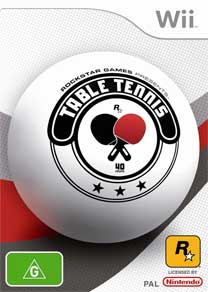 Given the amazing and fun ‘motion sensor’ control system of the Nintendo Wii, unique amongst all videogames consoles, there are some games that are just crying out to be made for the system. Tennis was a given, bowling is huge laughs, and cricket seems like a really obvious one still to be produced, for instance.

Table tennis is another. When this game made its debut on Xbox 360 here last winter, it quickly met with an enthusiastic response, and for good reason. Control was tight, the graphics were unexpectedly good-looking and playing against other (real) people sealed the deal; it was brilliant.

Now, developer Rockstar has brought the game to the Wii, relying heavily for appeal on the system’s motion sensing control features, rather than fantastic graphics. And that part of it is a lot of fun to begin with. Swinging the Wii Remote as you would your table tennis paddle in real life feels great, and is a real improvement over using a regular controller.

The game gives you three options for control, with the standard option only requiring players to use the Wii Remote (& not the ‘Nunchuk’ controller as well). This makes it much easier to hit the ball, and sustain a rally, than with versions of the game on other consoles, and could well be a good thing, making it far more accessible to younger players. Indeed, we tried the game out on a couple of kids, and even the four year old had a ball thrashing the Wii Remote wildly around and still making contact with the ball.

But that’s also part of the problem with this version of the game. With the ‘standard’ control scheme, it’s very easy to hit the ball – too easy -and you don’t even need to time it right. In fact, if you do try to time your swing to meet the ball exactly right, you’ll likely miss it altogether, because the game’s controls encourage you to ‘build up’ your shot by holding down the right button for a length of time before you actually want to hit the ball. The other two control scheme variations give you more control over where you place the ping pong ball or moving your player, but neither really add a great deal to the game play overall.Â  Whichever scheme you use for control, it feels like you could do anything and still hit the ball. You can literally play it with your eyes closed (we tried!), or with one hand tied behind your back.

But most of the appeal with the Wii version of this game is its accessibility- that anyone can play, epitomising the whole marketing strategy that everyone from your Gran to your baby can pick up a Wii controller and have fun. There’s no online play mode, though, so this is a game that’s best suited to your lounge room, a bunch of mates, and blasting away for ten minutes at a time to give those guns a bit of a workout.

This review was conducted on the Nintendo Wii platform, the game is also available for Xbox 360.