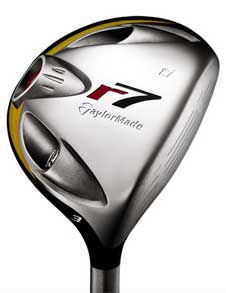 High on the success of the revolutionary r7 quad driver and the recently released r7 425 driver, TaylorMade has continued the roll-out of its extraordinary moveable weight technology (MWT) with the launch of their r7 Ti and r7 Steel Fairway woods.

Like their predecessors, the r7 Ti and Steel Fairway woods feature TaylorMade Launch Control (TLC), which allows the player to adjust the position of the clubs centre of gravity. By moving the 2 and 14 gram weight cartridges in the TLC ports of the club the player can now tune their fairway wood to suit their swing.

The introduction of the r7 Ti and Steel fairway woods give players of all skill levels the opportunity to benefit from the astounding TLC technology in a fairway wood. The r7 Ti will appeal more to players looking for forgiveness and a higher, more draw biased trajectory. The r7 Steel Fairway by comparison produces a more penetrating ball flight.

In their factory setting, both clubs will produce a draw bias while swapping the 2 and 14 gram weights over will deliver a slight draw bias in the r7 Ti and a neutral bias in the r7 Steel. This is the fundamental difference between traditional clubs and TaylorMade clubs – players can now adjust the club to suit their swing, rather than needing to change their swing to suit the club.

Other key features of the clubs are: