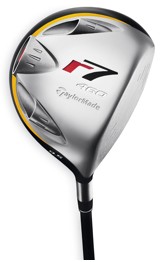 There is a new member of the TaylorMade moveable weight family. Hot on the success of the r7 Quad and r7 425, TaylorMade -adidas golf has added the r7 460 to its weaponry of technologically advanced drivers.

The r7 460 is the most forgiving driver ever from TaylorMade. It features largest legal head size for unbelievable forgiveness on off centre hits. Measuring 460 cc, the large club head not only offers the highest MOI (moment of inertia) but also gives an enormous amount of confidence to any player who sees its footprint in front of their ball.

Sixteen grams of moveable weight technology in a 2 and 14-gram weight cartridge allows you to shift from neutral to draw trajectory with just two clicks of the TaylorMade torque wrench.

Not only there leading edge technology in the head, the r7 460 also comes with the new REAX shaft. Co-engineered with Fujikura, the REAX has quickly become the #1 shaft on the US PGA Tour. It features a special weaves designed to reduce ovaling during the swing, resulting in more consistent and longer shotmaking.

Beautiful to look at, even better to hit with, the new TaylorMade r7 460 could be the answer to your best game yet.

It is critical to purchase TaylorMade products only from registered stockists, where you can have your new clubs professionally fitted and ensure that you are buying a genuine product.