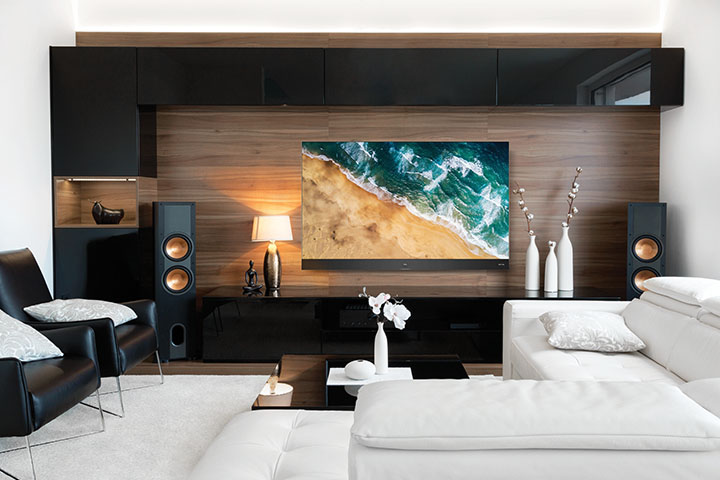 As everyone knows, a lot of electronic stuff is made in China, often for other brand names. But its own brands are increasingly breaking out. TCL is a TV giant from China, and it has been a few years since we last reviewed one of its models (way back in 2015 – a curved model no less!). The TCL 55X7 is the 55-inch model from the company’s current premium range.

Unlike much of the stuff that uses the magic word ‘quantum’ in its marketing, Quantum Dots in TVs do something useful. Instead of using standard white LED backlights, these use a blue/violet LED. The light from these strikes nano-sized crystals which have been engineered to react by producing quite specific wavelengths of red and green light.

Those wavelengths have been chosen because they precisely hit the most sensitive bands in the colour sensors in the human eye. That makes them brighter subjectively for the same energy input. It also means reduced “spill-over” from one colour into another, providing greater precision in the colour production.

The TCL 55X7 also features local dimming with 16 independent zones. It would seem to be edge lit, given that the panel is astonishingly thin. There’s the usual swelling at the bottom, in this case to around 45mm thick. You have to put the electronics and sockets somewhere, after all. But the top half of the panel sticks up from that and is only 8.5mm thick. It’s almost OLED-like in styling.

Below the panel is a cloth covered, full width grille that holds an audio system designed by Onkyo. The TV benefits from all four (I think) of its speakers firing forwards. There seem to be two tweeters and two woofers, with four watts each for the former and eight watts for the latter. It’s a step up from most TVs. When I listened to content delivered by the front speakers, they sounded quite good up to their limits. Those limits were the available power. At moderate levels things started to sound a little stressed.

But, of course, I used my home theatre audio system for most listening. The TV facilitated that by providing Audio Return Channel support for one of the HDMI inputs. When I was watching a broadcast TV show or streaming something to the TV the sound was passed on to a Denon home theatre receiver and, thence, to my 5.2.1 speaker system.

Yes, the TCL 55X7 really did produce a good picture. Black levels were really quite good, and despite the apparent use of edge lighting, the blacks were quite deep even on my test patterns, which are designed to show up weaknesses. The TV accepted all the regular signals I threw at it, including full-blown UltraHD at 60 frames per second.

Now let me adjust a little what I’ve said. The picture performance was very, very good with most HD and better content, including almost all UltraHD Blu-ray discs. The only weakness was with that UltraHD at 60 frames per second. It seemed to lack the pop and richness with which this movie – Billy Lynn’s Long Halftime Walk – normally presents. I wonder if the high frame rate hit some input limitations of the TV, such that it came across as 8-bit colour instead of 10-bit. Without the TV offering detailed reporting of the signal standards, one can’t really tell. And I should say that I’m used to watching this movie on an OLED TV that costs three times as much as this TV.

There was another weakness: 50 hertz content, the bread and butter of Australian free-to-air broadcasting.  This was dealt with relatively poorly. Without delving into too much detail, The TCL 55X7 seemed to assume that all such video had been shot as interlaced, when in fact most movies are shot progressively. Anyway, it means that in moving scenes there was a loss of sharpness and occasionally there were moiré artefacts on certain closely spaced lines.

The TCL 55X7 TV runs Android version 8.0. The TV version of this is a mature and effective system, with a wealth of apps available from the Play Store. Pre-installed are some streaming apps, most importantly including Netflix and Stan. There’s a dedicated button on one of the two remote controls for Netflix. That remote connects via Bluetooth, while the other one – it has more keys – uses IR.

There’s voice control with Google Assistant and with Amazon Alexa. The Google Assistant interface includes some control over the TVs own functions, such as allowing volume to be changed. I couldn’t get it to change TV stations or inputs by voice. When I asked it to, it would instead search for YouTube videos using keywords from my commands.

Getting Alexa to work

It turned out to be the reverse of that. I queried TCL and it turned out that my Amazon account, and therefore my Alexa account, was attached to amazon.com, not amazon.com.au. It was not yet available for the former but it was for Australia. It turns out that’s a difficult thing to change, but with some assiduous googling I managed it. You have to change your country in your Amazon online account. But that isn’t enough, you also have to deregister your device/s and then re-register them in the app with the new host name. But that isn’t enough either. You then have to uninstall the app, then reinstall it and log in again. Once I did that TCL Assistant appeared as an available Alexa skill. So I was all ready to voice-control the TCL 55X7 TV.

That proved to be a lot of trouble for very limited effectiveness. About the only thing that worked on the TV was switching it off.

Changing the volume by Alexa? Didn’t work. The only response I got was a beep from the Echo Dot, no verbal feedback and no action at the TV end. Changing inputs or channels? All she had to say on those topics was, “I couldn’t find any enabled video skills that can do that. Go to the Alexa app to manage your video skills and devices”.

I checked how Alexa was interpreting my words. She was hearing it as “Percy” TV. I dug around in the settings and found that I could change the TV’s name. I went for something less ambiguous – Android TV – and rebooted the TV, just to make sure everything was starting afresh. However, nothing had changed. Alexa still thought it was called “Percy TV”. That’s about when I gave up, rather than delete everything and start again. I would suggest that if you’re planning on using Alexa, come up with an easy name to begin with.

Perhaps this whole thing is in development still.

The TCL 55X7 TV supports streaming of video, photos and music via both Chromecast and DLNA. It worked to UltraHD resolution with video – both ways – but seemed to reduce resolution on still photos to no more than 1080p. My FLAC music streamed all the way up to 192kHz sampling, and of course MP3 and AAC worked fine. Apple Lossless isn’t supported.

That’s the great thing about Android – it is a solid platform that doesn’t depend on any particular manufacturer.

Also, I should note that the TV supports Freeview+, so you can easily stream catchup TV from the stations which support that service (only the ABC and SBS here in Canberra.)

The TCL 55X7 TV is smart, produces a very good picture, and is one of the more elegant-looking TVs on the market. Don’t worry too much about my Alexa travails. I’m inclined to blame Alexa, which I’ve always found a tricky thing to get working properly.