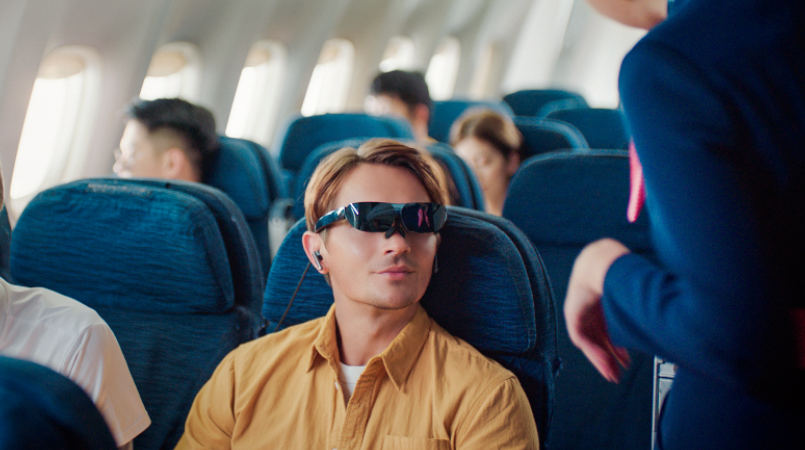 A 140-inch screen that fits in your carry bag, the TCL NXTWEAR G Smart Glasses aim to keep you entertained anywhere, anytime.

Of course most of us aren’t going anywhere, anytime soon, in the age of COVID. Once we’re allowed to travel again, this “wearable display” would be great for watching movies on a plane. Until then, the TCL NXTWEAR G Smart Glasses would help keep the peace in busy households which are struggling to share screens during lockdown.

The equivalent of strapping a 140-inch television to your face, these glasses could act as a make-shift man cave or let you watch late-night sport in bed without disturbing anyone.

The TCL NXTWEAR G Smart Glasses are more like bulky sunglasses than a full headset. While most headsets rely on LCD screens, these feature two tiny 1080p OLED displays – once for each eye. The result is impressive picture quality when it comes to colours and contrast. There are also speakers built into the arms, to create an immersive experience.

While this is a great foundation, what really counts is what you can do with them. That’s where things get a bit confusing.

These are not virtual reality glasses. Nor are they 3D glasses. The best way to describe them is a “wearable display” – with a normal 2D screen floating in front of you. It’s the equivalent of watching a 140-inch television, sitting four metres away.

If that’s all you want from these glasses, you might be happy. If you’re expecting more, you’ll be underwhelmed.

It doesn’t help that TCL’s own marketing materials state “the NXTWEAR G also offers 3D 4K content”. Good luck finding this content. Technically these glasses could support this, they even feature an accelerometer and gyro to detect when you move your head. Unfortunately, it’s not possible to convince video services like YouTube to recognise the glasses as a 3D headset.

When it comes to watching something, the TCL NXTWEAR G Smart Glasses connect to a device via a built-in USB-C cable. They plug into devices like smartphones, tablets and laptops which feature a USB-C port with DisplayPort Alternate Mode. The glasses also draw power from this device, so you don’t need to worry about recharging them.

The need for USB-C means that Apple iGadgets with Lightning ports are non-starters. TCL offers a list of more than 100 devices, mostly high-end devices from the likes of Samsung, LG, Huawei, HTC, Lenovo, Dell and HP. To ensure everything worked, TCL sent along its TCL 10 Plus smartphone to test the glasses.

You can use the speakers built into the glasses, which offer surprisingly good sound with more full-bodied sound than you might expect. Alternatively, you can divert the sound to headphones connected to the source device. That’s probably a considerate move when others are sitting nearby, as the glass’ built-in speakers bleed a lot of audio.

There’s no easy way to connect the glasses to an HDMI source, such as a games console. In theory, you could use an adaptor, but TCL doesn’t make any promises in this department.

One of the key selling points of the TCL NXTWEAR G Smart Glasses is that, unlike a VR headset, they don’t completely cut you off from the outside world. They leave a large gap at the bottom. If you’re sitting in front of a computer wearing the glasses, you can still look down and see the keyboard. You obviously can’t see the computer’s screen unless you tilt your hear right back, so the glasses aren’t really practical as a second display.

This openness means you can still interact with people around you, although it’s still rather anti-social to wear them around other people. Unless of course you’re doing so in order to more effectively share a small space like your lounge room.

The ability to see the outside world is distracting. If you want to become truly immersed in a movie, it’s best to sit in a darkened room.

There’s just enough clearance under the TCL glasses to wear your normal glasses. If you have reading glasses, you’ll need to wear them to keep the picture in focus. The TCL glasses also come with an inset which lets you insert prescription lenses. It’s a shame there’s no way to adjust the focus.

The arms are rather snug on your head and don’t have a lot of give, so those with a large noggin will likely find them uncomfortable after a while.

When it comes to eyestrain, your mileage may vary. For my forty-something eyes, eyestrain kicked in quickly, even wearing my reading glasses. Especially in a brightly lit room where I could see the rest of the room in my peripheral vision.

That said, the younger eyes of my teenage children had no problem with eyestrain when wearing the TCL NXTWEAR G Smart Glasses.

Whether or not you need glasses, it’s difficult to keep the entire picture in focus. It’s not a question of finding the sweet spot, it’s a limitation of the lenses in the glasses. They blur the sides of the picture and the only way to fix this is to adjust them on your face to the point where you can no longer see the very bottom of the picture. There’s a choice of three nose clips, but this doesn’t help.

This blurring around the edges is unlikely to bother you when watching a movie. It’s quite frustrating when viewing the virtual desktop built into the glass’ smartphone app.

When you plug the TCL NXTWEAR G Smart Glasses into a smartphone, you’re offered the choice of mirroring what’s displayed on the phone or seeing a virtual Windows-esque Android desktop. In desktop mode, the phone’s screen acts as a touchpad.

The desktop would be useful if you want to see the glasses as a productivity tool, such as viewing office documents. If you believe TCL’s marketing images, digital hipsters will wear these glasses while working in a cafe. Nice in theory, but in practice you’d look and feel like a real tool. In terms of being anti-social, it’s a big step up from wearing noise-cancelling headphones in public.

The glasses make much more sense as a personal entertainment device. Any streaming video app which works on your smartphone will play nicely with the glasses. They’re also good for mobile gaming.

It’s interesting that TCL throws in a six-month Optus Sport subscription. Watching a movie or late-night football on the virtual big screen, without commandeering the television in the lounge room, is perhaps one of the best use cases for these glasses at home.

The TCL NXTWEAR G Smart Glasses are great for what they are. They offer impressive picture quality and a pretty good user experience if you just want to watch something like Netflix.

But is that enough? To me, $899 is a big ask when they’re only a “wearable display”. For that kind of money, you could throw a tablet or portable games console in your travel bag. When you’re in public, watching content on your phone or tablet would be more practical most of the time. The glass would be great on a long-haul flight, combined with decent noise-cancelling headphones.

The inclusion of 3D/VR capabilities would extend their usability, especially considering this kind of money would get you into VR headset territory. Likewise, the ability to connect to an HDMI source would add to their usefulness. You could use them to sit on the couch and play your PlayStation, while the person sitting next to you watched the television – letting you do more with your lounge room.

No, they’re a nice idea but, for most people, your $899 entertainment budget could be better spent elsewhere.