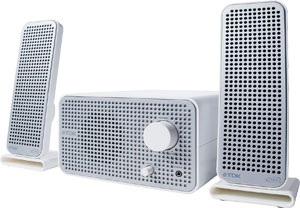 While it would be great to live in a world where we could all justify spending $600 on speakers for our PC, some of us must live to more modest budgets. And that?s where TDK steps in.

Speakers that ship with PCs are almost always terrible, mostly because they don’t include a subwoofer. The Tremor XA60 (now with new white livery!) does include a sub, a modest 15 watt unit that is nevertheless a lot better than nothing.

The idea with these speakers is that the sub sits up on top of the desk with the satellites, close enough to the user that they can twiddle the volume knob when required. Because the sub is right in your face, as it were, its lack of power is less noticeable.

This system isÂ not powerful, but that’s because it’s not about powerÂ – it’s about significantly boosting the quality of the audio you get out of your PC without having to spend the kind of money that would buy you a major CPU upgrade.

The XA60 would be a better unit with a second stereo input for an MP3 player, ideally on the front of the sub. As it is though, this is an ideal low-cost system for using with streaming web content, music and basic gaming. One for the kids, or for the notebook PC in the study, perhaps.