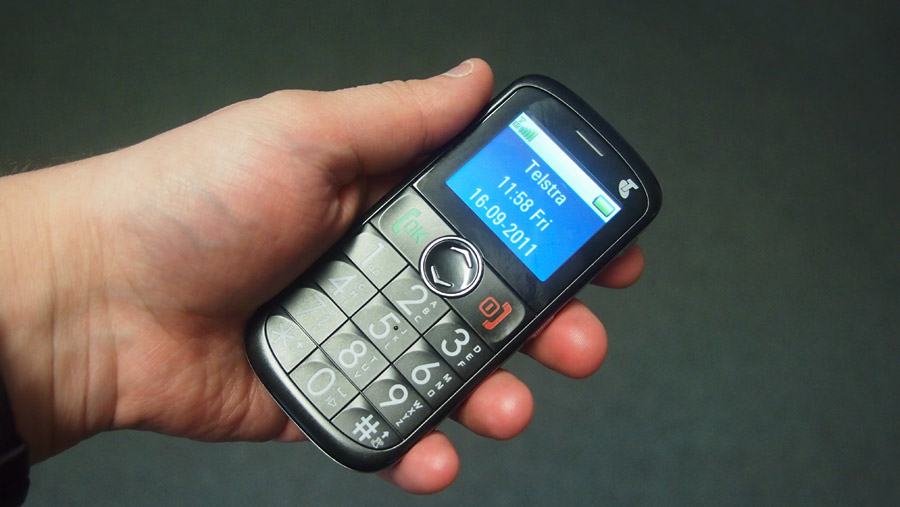 Some people just want a phone to make and take phone calls. Uninterested in web browsing, apps, games or multimedia, they want only the ability to make calls easily and – if they’re feeling fancy – maybe send a text message. The Telstra EasyCall 2 offers this and a little bit more for a hair under a hundred bucks.

Built by ZTE, a Chinese manufacturer Telstra uses on 3G modem dongles and other mobile handsets, the EasyCall 2 is what we’d call a bare minimum handset.

Like the phones that ruled the airwaves before net-friendly smartphones took over, this is a candybar-style design with physical number buttons, a green call button, a red hang-up button, and a dual-direction pad for navigation. The screen has no touch features and is small, measuring just 1.8 inches diagonally. Volume buttons on the left edge of the handset control the sound levels.

A few extra features have been thrown in, however – this is the 21st century, after all.

You get an FM radio with a switch for selecting either headphone or loudspeaker output, and LED torch on the top, Bluetick certification for extended reception and range in rural areas, and an easy to use lock switch on the right edge allowing you to lock up the buttons in a jiffy. There’s also a security switch on the back, a toggle that, when activated, will emit an alarm, send an SMS and call automatically up to four pre-programmed numbers.

The bottom edge of the phone features a 3.5mm headphone port and microUSB charge port.

We admire the simplicity of the EasyCall 2, and see it finding a home with people averse to the complexity (and cost) of smart phones. At the risk of stereotyping, many seniors will be comfortable with this phone, as will parents looking for a phone that will survive inside their kids’ school bag.

Built out of black and silver plastic, it’s not the best prettiest phone on the block. The matte black rear cover is easy to grip, but slide your fingers down too heavily and you’ll find it comes off easily – a bit too easily.

“Easy”  is, however, the name of the game with the EasyCall 2, and it’s practically impossible to screw up using this handset.

The green button accepts calls and acts as the “OK” button when selecting, while the red button hangs up, works as a “back” button in the menus, and also powers up and down the phone.

Making calls is easy, as the buttons on this handset are huge, sitting at 15mm across, with large numbers printed on them with the letters used for writing printed vertically to the right. As you punch in a phone number,  it appears on screen while the handset speaks the number.

“Nine-three-five-six,” said the EasyCall 2, as we began dialing the number for the GadgetGuy office. Cute, and useful feedback for when you’re unable to see the dialed numbers on the screen.

Compiling messages via the alphanumeric keypad isn’t as easy as typing on the QWERTY keyboards – be it virtual or physical – of a smartphone, but it does get the job done.

The lock mechanism is easy to use too, even easier than the systems provided on many smartphones. Simply slide the side lock switch down into the “locked” position and every button on the phone stops working until the handset is either unlocked or someone rings you. If the latter happens, you can pick up or reject the call with either the green or red buttons (respectively). After you’re finished, the phone stays locked until you unlock it.

As for the extra features, the LED torch at the top operates when the phone is on or off, and the FM radio can be listened to either through headphones using the 3.5mm port or through the EasyCall’s speaker.

There’s also a nifty feature Telstra calls “the switch” consisting of an orange switch. To use, one simply programs up to four phone numbers, a message and the volume of an alarm to be used in case of an emergency. When the switch is pushed into the “up” position, the phone emits an alarm, sends the message to the preset numbers and calls those numbers. It’s a useful feature – especially for medical emergencies – but the switch so invites curiosity that we can see many alerts being sent falsely.

Unusually for a modern handset, there’s no Bluetooth on offer here. With handsfree limited to just the stereo headset, the EasyCall2 isn’t the ideal phone to use for in-car communications.

A prepaid phone that comes with $10 of starter credit, the EasyCall 2 is locked to the Telstra network.

The Telstra EasyCall 2 isn’t for everyone. In fact, the person who’d get the most use out of it probably doesn’t want a touchscreen, keyboard, or internet access on the phone; this person probably doesn’t want any computer-like features at all. And if this person is your dad, mum, grandpa, grandmum, or even a kid, the lack of features makes it perfectly suitable for them, as does the price tag.

Overall
Features
Value for money
Performance
Ease of Use
Reader Rating0 Votes
Speaks numbers as you press them (unless on silent); Charges on the microUSB standard; Can be used as a loudspeaker FM radio; Built-in LED torch works even when the phone is off; Useful emergency alarm; Bluetick certification makes it a good choice for use in rural areas;
No Bluetooth; Back cover not secured as firmly as we'd like;
4