Telstra Tough Max 3 – you can beat it – literally 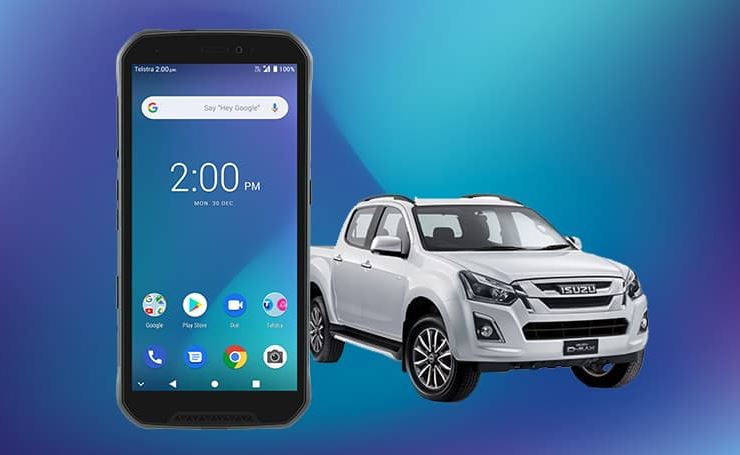 The Telstra Tough Max 3 is a tradie’s phone. Rugged, unassuming and highly functional – just like a tradie.

We put the Telstra Tough Max 3 through its paces including an IP68 test and because we did not have to return it – some rough and tumble treatment. It passed and even went for a swim.

When you buy a tough phone, you expect a few compromises, but the Telstra Tough Max 3 turns out to be a well-featured phone made for Telstra by ZTE.

Base specs – all pretty good

It is a 1080p screen, so text and images are crisp. But it lacks brightness (about 250 nits) and contrast (1000:1) for direct daylight use. It is not bad, but you will need to shade the screen. We did not measure colour gamma or Delta E as this is not a requirement of a tough phone.

It has good haptic feedback, although no glove mode for tradies. It has a low 67.6% STBR – massive top, chin and side bezels.

The screen is a fingerprint magnet – we did not add the glass protector for the test. It has Gorilla Glass 3, so it is relatively scratch, but not impact resistant.

You can unlock via 2D face unlock. We found it reliable in daylight and poor in low light.

We expected that as the case is IP68 rated and cooling is harder in a sealed environment. Still, it is quite acceptable.

While it is a game capable GPU, there is no ‘game’ mode to boost frame rates. It will play most modern mobile 1080p games at 24fps or better.

While the Qualcomm SoC supports BT 5.0, this only implements 4.2. The main difference would have been longer distances between the phone and a BT device.

It has a large 3920mAh battery that should go a couple of days without charge. Over seven days use we charged four times.

Battery discharge at idle is around 254.8mA meaning around 15-20 days standby. There is an adaptive battery mode (part of Android 9 and Qualcomm SD AI) that may give more time after it has learned your use habits.

It has a single, mono earpiece speaker and a front-firing bottom speaker. It is what it is – designed for clearer voice with no bass, flat mid and no treble.

Music volume is 75dB, and the ring volume is 80dB – loud enough, but we would expect a tradie phone to be deafening.

The single mic at the bottom of the chin has good sensitivity but no ANC so we found ourselves cupping the mic for clarity.

Handsfree is adequate although we would expect little more volume from a tradies phone.

We tested using the Sony WH-1000Xm3 BT headphones but could only get a BT 4.2 SBC codec connection.

No policy on OS updates but I doubt it will get Android 10.

There is an extra key on the left called a super key. I kept wondering why the flash was frequently on until I discovered it. You can double click for the camera and long press for the flashlight – turn it off!

Signal strength is -83dBm excellent finding next two towers at -85 and -101 – a good stable signal but we did find it was more often 3G  than 4G.

Telstra claims military-grade IP68 dust and water resistance of 1.5 metres for 30 minutes. ZTE claim IP68, no mIl-spec – no matter it is tough enough.

IP68 means dust tight and immersion to 1m for 30 minutes. While we never recommend throwing or dropping the phone, let alone a swim, we did test these. A drop from 1.2m (shoulder height) to concrete did not affect it and a 60-minute, 1-metre dunk in the pool was fine. It is built like a tank and will withstand tradie treatment.

The worst thing we can say is that it is better than a social media capable camera. it is very much capable of taking decent worksite shots and recording serial numbers etc.

I reviewed the Telstra Tough Max 2 in January 2018. Tough Max 3 is an incremental improvement on it, although losing Qi charging and gaining some weight.

Over the review period, I came to like the device. It has plenty of power, a screen that is not too bad (yes, I am used to AMOLED), decent battery life and ripper reception. It is reassuring to know you can mistreat it and it will still work well tomorrow.

Rating this is easy – it is a tough phone first and foremost, and the specs are quite respectable.

Telstra has a ‘Tough Max 3” video