Telsyte: iPhone prices up, iPhone sales down, down, down 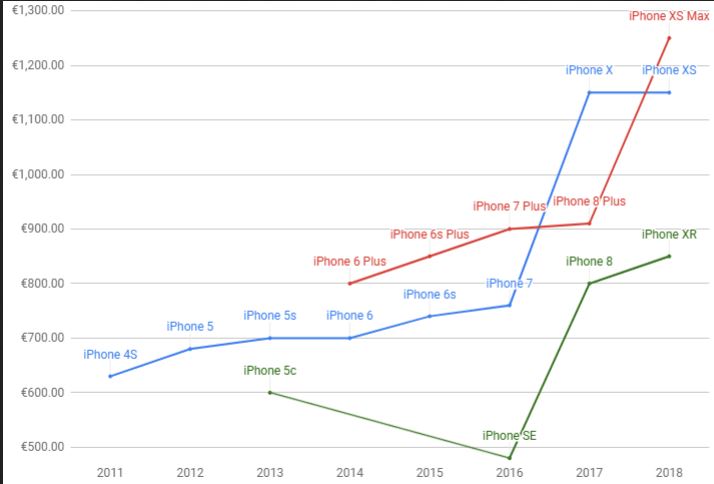 Prices in Euro. Multiply by 1.6 for AUD.

The Telsyte Australian Smartphone and Wearable Devices Market Study 2019 shows that as iPhone prices went up, sales nosedived. And, users are holding onto 4G smartphones longer to see what 5G really means.

Telsyte is a respected research company – one of the few that focuses on Australia. Its Market Study 2019 comes from a representative sample of 1,025 respondents, and a range of manufacturer and analyst supplied statistics.

It does not purport to be a ‘ship-in’ sales analysis but mixes consumer sentiments with local sales (sell-out) and other information to extrapolate what the market is. Telsyte is usually right!

Price up and demand down

Consumers are holding onto their 4G handsets longer to see how 5G affects them. And, with surging prices of new models, it makes sense to hold onto the 4G for another year or so.

Telsyte research found the average selling price (ASP) of smartphones went up by 13% between 2017 and 2018, impacting consumer demand. Apple drove most of the increases – others simply followed.

Despite huge price rises Apple maintains an 85% repeat purchase intention rate with the next being Samsung (70%).

Interestingly Telstye says the Australian market in H2, 2018 was Apple 42% (9.1 million users) and Android at 58% (11 million users). That is at odds with ‘ship-in’ research and shows that there are truckloads of unsold iPhones sitting in warehouses.

In the Android smartphone market, the top three vendors were Samsung, OPPO and Huawei.

Those looking to replace a smartphone in 2019 will wait to see what 5G means to them. Can they get 5G, is it necessary and how much extra will it cost? Telsyte says 24% of consumers will wait to buy a 5G device and 33% say that 5G will drive their next purchase.

Foad Fadaghi, Telsyte Managing Director, says, “There is a clear imperative for carriers to bring 5G handsets to market as soon as possible given the lengthening of the replacement cycle. Despite 5G mobile services not yet available currently in Australia, we believe consumers will want to ‘futureproofing’ their next purchase, given they anticipate using the same handset for the next three years or longer.”

Sales down but use up!

Smartphone dependency is at an all-time high. 54% of premium smartphone users (handsets costing greater than $600) claim that their smartphone is their main digital device. This is similar to trends in Asia where premium, larger screen (we used to call them phablets) are the primary onramp to the internet.

A fast-growing area of smartphone usage has been mobile payments. 46% of all mobile payment users claim to use it more than 75% of the time.

13% of Australians aged 16 to 34 (‘millennials’) have changed or joined a new banking provider due to the lack of mobile payments support, and 14% of Apple Watch users have also done so.

In Australia, Google is leading the smart speaker market with 72% in Australian households.

This is contrary to the US experience where Amazon leads. Australian adoption of Amazon products is very much slower as it is seen mainly as an online shop here – not a tech giant.

3.5 million smartwatches were in use at the end of 2018 as consumer behaviour increasingly shifts to new devices that work alongside smartphones and apps.

A total of 1.1 million smart wrist wearable devices (combined smartwatch and smart bands) sold in the second half of 2018 (up 30% from 2H17), and sales of smartwatches continued to lead the category (65% smartwatch).

Our readers told us that Apple increases were too much of a stretch.

The real smartphone action is now in

Our readers say they will wait until 5G is well and truly up and running.

Yes, there will be handsets soon, they will cost an arm, and a leg and coverage will be very limited. Apple is holding off until 2020 for its first 5G – after everyone else has made mistakes.

And, don’t be fooled by claims by Optus et al that 5G broadband will be the same price as 4G. If you read between the lines that claim is for fixed wireless home broadband only where NBN FTTP/FTTN/FTTC cannot reach – or about 60 suburbs.

We are hearing that Telcos are holding off repricing 4G mobile data when it could be as much as 50% cheaper now! They need the gap between 4G and 5G to be minimal and then gradually reduce 4G via its MVNOs – it is an old marketing ploy. Additionally, 5G phones will use a lot more data – US studies say 100GB a month is more like it!

And, Apple HomePod (Home kit) sales were almost non-existent. In fact, HomePod returns were so high due to dissatisfaction, not of the music quality, but of what it could do. Read the full article here.

Smartwatches versus fitness bands is also a no-brainer.

ABE research predicts smartwatches will overtake fitness trackers next year. Apple’s lead has dropped from 61% to 41% as other smartwatches (driven mainly by Android phone ownership) offering more features are taking over.