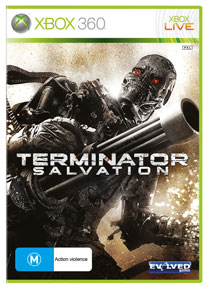 Someone at Swedish developer GRIN Studios must really, really love Galaxian. The ‘Aerostat’ flying machines in Terminator: Salvation move and behave just like that 1979 arcade game, but offer less challenge. Apparently set two years before the forthcoming movie, Terminator Salvation is definitely a game of the film. Once you’ve tabbed through five unnecessary logo sequences – why do film companies always insist on forcing their customers to sit through all this front-end guff? – and the game’s eventually loaded, you get movies.

The cinematics, designed to impress with cool jumps, explosions, high-speed chasing and narrow escapes, take centre stage in the opening to this game, with control only sporadically and very briefly handed over to the player for you to do something. When it is, you find yourself sniping at some machines, hitting things with rockets and then trudging from one identical-looking debris-strewn street to the next until the next wave of machines hits you. Shoot Aerostats, Spiders, Endos, rinse, repeat. This is pretty much how the entire game plays out.

The screen is largely free of any dials, bars or any other graphics, which helps with player immersion, with only a health bar appearing when you start to take fire. The lack of a map, however, means the levels are structured to lead you by the nose through you’ll be where they want you to be next. Health doesn’t regenerate automatically either, so no running around a corner or ducking behind a barrel for a few seconds to wait for the health bar to fill back up, and there are no magic health packs lying around, which maintains a degree of challenge. Instead, you’re ‘rewarded’ with a health top-up as you finish each ‘wave’ of machines, which is a little weird but rewards success, I guess, and keeps you going back to the fight.

Graphically, there are some very flat, horrible textures, sharp almost. It looks like you could cut yourself on all the foliage hanging around off the buildings, more like sheets of glass, and the character models have that scary, dead-eye mannequin look. And for the savior of mankind, John Connor is weirdly athletically challenged: he can’t jump, although he can scramble over low obstacles, much like in Gears of War. Come to think of it, exactly like in Gears of War, and the gameplay similarities with that game don’t end there. He can only carry 2 weapons at a time, plus grenades and moving from cover to cover is a central tenet of the gameplay – indeed the whole game is built around this mechanic.

Some of the machines are quite impressive – it’s cool to see one of the ‘endos’, or bipedal terminators, stalking around looking for your team, and the first appearance of a Harvester is impressive, and a little intimidating. There’s a good, quick weapon switching system in evidence, too, and if you match a certain machine type with a specific weapon, you can take the down a lot more easily. But there are limitations to the combat which point to serious design faults. Very early on, you’re told to take down the robots by flanking them and firing on them from behind. This isn’t always necessary, as an RPG will take them out pretty effectively, but sometimes if you do actually try to flank, by moving down a level in a building, say, or trying to take a circuitous route around the machines, a ‘Do not leave the battle’ message flashes up on screen. If you persist, you get a ‘you left the battle’ message, and the game kicks you out, returning you to a menu screen to ‘retry’! That’s a dreadful design decision that hampers any freedom of movement you might be forgiven for thinking you had in the game and only reinforces how linear and restrictive the gameplay actually is.

We were expecting more from a company that ported the excellent Tom Clancy’s Ghost Recon Advanced Warfighter over to the PC, hoping they’d at least implement similarly superb squad-based fighting elements into Terminator, but then the same developer recently produced ‘Wanted’, which was clearly more of a template for this game, with a very similar ‘take cover, shoot, move, take cover’ style of gameplay and a very linear path through the game, low difficultly level and too much repetition. The non-interactive dialogue scenes are mostly decent, retaining a sense of credibility in the incredible situations, but they frame what is simply a long string of unimaginative shooting tasks bookmarked with checkpoints that trigger the next ‘cut scene’ on arrival. This is seriously ‘old-skool’ gaming: end of level power-ups and 20 seconds of loading between sections, weak points around the back of enemies, a main hero character who can’t step over a two-brick high wall and those Galaxian flying machines.

Overall, despite some OK machine standoffs, Terminator Salvation just doesn’t feel like the ultimate battle for survival, and if there’s any USP in the Terminator property, it’s surely that: a desperate fight against overwhelming, seemingly insurmountable odds, and immense satisfaction when you actually bring the machines down. Terminator Salvation utterly fails to deliver on that count and while not dreadful, it’s just one more ‘movie made game’ missed opportunity to chuck onto the huge pile of similarly mundane brethren.