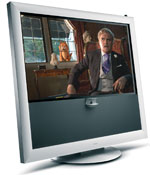 The design of Bang & Olufsen’s first plasma was inspired by paintings leaning against a wall in an art gallery and, indeed, the panel did look something like a work of art. The follow-up Beovision 9 previewed by GadgetGuy in November at one of the company’s Sydney showrooms continues the same design theme, but in a widescreen format with a 50 inch panel, built-in centre channel and a 250GB hard drive for recording video.

The centre channel incorporates the company’s Acoustic Lens technology, which claims a wider dispersion of sound than conventional tweeter designs, and there is space at the rear of the cabinet to integrate B&O’s version of a Media Center. This allows music, photos and video stored on a remote PC to be enjoyed on the big screen and through the set’s audio system. Scheduled for released in 2007, the BeoVision 9 has analog TV reception only, but a standard definition tuner card available as an option. It will cost around $35 000.

Previewed alongside the Beovsion 9 were design samples of the forthcoming Beovison 8 and BeoLab 9. The former is an LCD TV designed for small viewing areas, and while no DTV tuner is supplied, Bang and Olufsen claims the supplied remote will operate all major digital set-top boxes. The BeoLab 9 are miniatures of the company’s flagship Beolab 5 loudspeakers. Both products will be available by mid-2007.