The Chronicles of Riddick: Assault on Dark Athena 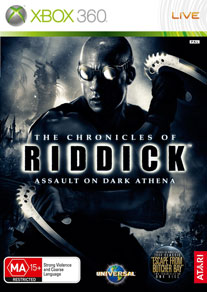 The Chronicles of Riddick: Assault on Dark Athena presents itself much as the ‘Orange Box’ from EA did 18 months ago: it’s more a compilation, shipping not only with the Dark Athena adventure but also the original game, subtitled ‘Escape from Butcher Bay’, first released on the Xbox, as well as a multiplayer offering. Riddick, modelled on and voiced by Vin Diesel, first came to our notice in the film ‘Pitch Black’ back in 2000, bringing us an antihero whose domain was darkness, actively hunting monsters rather than allowing them to hunt him.

So you know the guys who made this game want you to be all stealthy, living in the (plentifully distributed) shadows, suddenly springing from them to claw down an enemy before you retreat as quickly as you appeared, dissolving back into darkness and keeping everyone on their toes. But it’s difficult to do that in this game, appealing as it might be, due mostly to the preternatural ability of the NPC (non-playable character) enemies prowling the ship. More often than you’d like, you end up resorting to using projectile weapons simply because you get unfairly ‘rumbled’ and need to fight your way out quickly. Taking this noisy, unskilled path is far too frequently the best way to acquit yourself, but it also works against the intended character of the game and serves as a poor contrast to the Butcher Bay predecessor on the same disc.

The dialogue is refreshingly free of cliche for the most part. Vin’s character – you, in effect – has that paver-laying-bitumen rumble that makes all the dogs in the house go crazy and a vocabulary that makes Rocky sound like a genius – but character interaction in the video sequences is credible and entertaining, with excellent voice acting. Being a prison, some of what you hear will be quite challenging, too, with decidedly violent and offensive language normal fare.

But there are a few too many ‘go fetch’ missions that send you off on petty errands that contradict the bleak staging of the piece, often making you backtrack and re-visit locations several times over. Dark Athena has nothing like the progression and pacing of the first game, then, and features a lot of activity that just seems designed as ‘filler’ to pad out the length of the adventure, including some ridiculous clambering over crates – albeit flashy, knobbly metal crates with bright, shiny LEDs – avoiding searchlights as you go; a staple of videogames that are rarely successful, and much more frustrating than challenging.

Past the halfway mark in the game, the necessity to shoot your way out becomes more prevalent, too, forcing the player along a route they don’t necessarily want to take. Multiplayer is routine, except perhaps for the briefly entertaining ‘Pitch Black’ mode but nevertheless, taken as a package, The Chronicles of Riddick: Assault on Dark Athena is well worth your time and money, as the first game offers a classic blend of action, adventure and atmosphere and the second, despite not living up to the promise of its predecessor, still demonstrates the kind of thought and attention so lacking in many of its competitors.

This game was reviewed on an Xbox 360 console – it is also available for PlayStation 3 and PC.