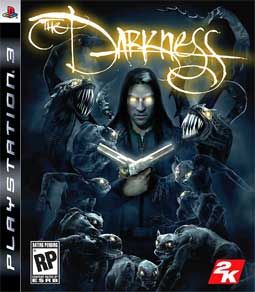 Be wary of The Darkness – the game, of course, not just any old darkness – because it’s not really a game for your younger children, or even the more impressionable older ones. The ‘Mature’ rating on the game’s box is not there to spoil your fun, but to make sure you understand that you really have no-one to blame but yourself if you play it and only then consider viciously ripping the only-just-stopped-beating hearts out of your victims distasteful. Because you do that a lot, and you do it right from the beginning of the game.

Funnily enough, however, that’s one of the main attractions about The Darkness. Not the violence, per se, but the uncompromising gaming experience it offers you. As is probably already apparent, you play a bad guy in this game. Not all bad, depending on your personal morality set, because he’s a mobster with a legitimate claim to having been treated pretty shoddily, even downright evil, but you are at least taking down the ‘even worse’ bad guys.

What do we mean by the experience it offers you? Well, in pure gaming terms, The Darkness is a fairly routine ‘first-person’ shooter/ action game, and you spend a lot of your time on missions to remove a certain figure, killing lots of other bad guys along the way. But it’s what The Darkness delivers over and above these standard expectations that make the game far more enjoyable, and compelling. The story is excellent, weaving a tale of retribution that keeps you interested and determined to set things straight for your hero. There’s a very well-considered in-game form of guidance, by the way of street signage, the ability to have conversations with other characters you meet in the game, and the ‘I’ information kiosks, so you don’t fall prey to the common action adventure game trap of losing direction and not knowing what to do next. Even while the game’s loading, you’re treated to contextual scenes that maintain the dark mood while giving you insights into your character.

The game’s developers are good storytellers, and that’s an element that is often sorely missing from similar games. It’s based on a comic creation, which means they had plenty of information to go on, but Starbreeze have run with that, producing a magnificent complement to the folklore and then going further to ensure the game stands on its own merits. Chock full of entertaining extra ‘collectables’, which unlock character art, inspire amusing in-game telephone conversations and so on, there’s also a decent multiplayer element to the game, for anyone looking for a slightly less solitary slice of the action. The Darkness comes very highly recommended.

Available on PlayStation 3 and Xbox 360.