The Day The Earth Stood Still 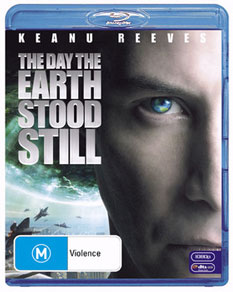 The Day The Earth Stood Still is a remake of the 1951 science fiction classic. As is often the wont of sci-fi, there is an underlying theme, or big message, and back in 1951 that message was concern about the nuclear arms race and the Cold War. Cut to 2008 and the remade movie’s thematic concern is global warming.

Keanu Reeves plays the ‘alien hitman’ Klaatu – well, he becomes Klaatu. He starts off in the film as a mountain climber in the high parts of India in the year 1928. His mountain idyll is interrupted by an egg-shaped block of energy trapped in what looks to be ice, and when you’re by yourself in the snow and you encounter such a thing, you of course take to it with a climbing tool. That’s when, for mountain-climbing Keanu, it all goes pear-shaped. Cut to present day. A bigger version of the the ice egg lands in Manhattan, and out steps GORT – same name as the robot character in the original film, but in the new film it’s an acronym, Genetically Organised Robotic Technology – and, in a placenta-like container, is Keanu/Klaatu.

So, given the alien-fish-out-of-water role, Keanu does his usual schtick – implacable almost expressionless – but as the alien it is called for in this role. (As an aside, is it just me, or does everyone do a word association thing with Keanu movies, Keanu = canoe = block of wood?) Jennifer Connolly and Jaden Smith play a mother and stepson who act as Klaatu’s teachers of the tricky ways of humanity, and… I’ll stop there, so as not to be a plot spoiler.

Look, this is a decent film, it’s not great, it’s not bad. Jennifer Connolly as ever is cool and classy, Keanu makes what I feel are his acting limitations work in this role, and Will Smith’s kid Jaden Smith puts in another confident performance. So the acting is good, the special effects are about right – they don’t overpower – and I wouldn’t criticise the heavy-handedness of the film’s theme, it’s really no more laboured than the lauded themes of the 1951 version. But really, this film doesn’t make you go wow; it doesn’t really make you think, it’s just something you (can) watch.

Spot the slightly clumsy inserts of LG computers and mobile phone, and the less clumsy but rather extended plugs for McDonalds and Honda.

Special features on the DVD include (descriptions above):