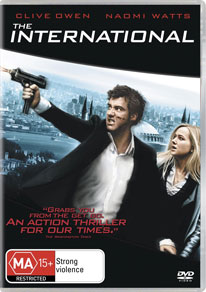 A movie about the spy game that owes more to the drab, depressingly realistic TV series Spooks than more glitzy LA LA Land efforts like Mr and Mrs Smith and the Bourne films, The International starts slow, stays slow and ends in a little ‘so what’ ephemeral puff of smoke.

Clive Owen and Naomi Watts take centre stage in what amounts to a conspiracy movie that really doesn’t unearth any kind of conspiracy at all, given that it’s about bankers acting in criminal fashion – d’uh! – helping to fund and finance armed conflicts around the globe and taking their cut in the process.

Despite a couple of interesting moments – the ludicrous Guggenheim shootout not being one of those – the ‘intrigue’ is conspicuous by its absence, the protagonists credible but dull and the utter lack of payoff realistic but ultimately almost the antithesis of entertaining.