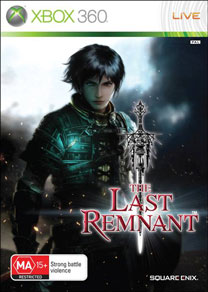 Square Enix Ltd., the publisher of Square Enix interactive entertainment products in Europe and other PAL territories, today announces further details on its highly-anticipated original adventure, The Last Remnant, released in Australia, exclusively on the Xbox 360.

From the makers of the Final Fantasy series comes a brand new epic adventure on a scale never seen before, and with a planned launch – aimed at rewarding all fans everywhere – players across the globe will be able to buy The Last Remnant simultaneously across Japan, PAL territories and North America.

Fans of Square Enix and Xbox 360 players can look forward to redeeming exclusive in-game items via pre-order deals with select retailers. Players should also watch out for the pre-launch teaser videos that will whet the appetite of any keen action adventurer.

The Last Remnant is a completely original adventure title, benefiting from the finest creative talent to build a lush, real-time fantasy world. The game’s battle system has been carefully crafted to deliver a brand-new experience for players, as they control forces in massive cinematic battles.

In ancient times, mysterious artefacts referred to as Remnants were discovered all over the world. Offering incredible power, they soon came into the hands of the covetous few, and thus was the world’s delicate equilibrium shattered. The people were divided into those who ruled and those who were ruled over. War was inevitable. Our story begins a thousand years later…

Rush lives with his sister Irina on the secluded Eulam Island, a place far removed from the ceaseless battle for control over the Remnants which rages on the mainland. However, his peaceful life is shattered one day when he witnesses his sister’s abduction by a mysterious group of soldiers. He immediately sets off after them, ill-prepared for the evils of the outside world but determined to find his sister at any cost.