The New iPad – hands on preview 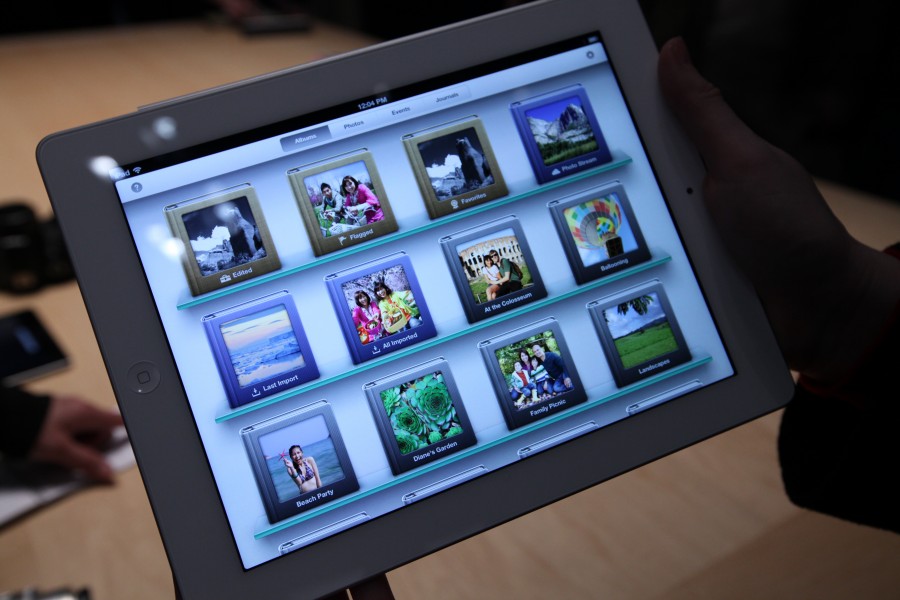 The Album View on the new iPhoto application.

Right after the big announcement, we headed across for a hands on look at the New iPad. Here’s our first hand report:

From the outset, looking at the New iPad is like a bit of deja vu – it seems nearly identical to the iPad 2, and for the most part, it is. The only cosmetic differences are that the New iPad is marginally thicker – about 0.8 of a millimetre, it’s fractionally heavier and the camera lens has a larger diameter. When comparing the two though, it’s very difficult to tell unless you have them side by side. Otherwise, all of the connectors, switches and buttons are in the same place, and there are choices of black and white bezels. The units we saw had the same magnetic Apple Smartcovers that the iPad 2 came with.

However, the big question is what about that Retina screen? From a first hand point of view, it is simply amazing. The degree of sharpness is unlike anything available on a tablet today. This really becomes apparent when viewing web pages, where often text sizes need zooming in to read comfortably. Now, those smaller blocks of text are razor sharp and much easier to read, and there wasn’t a ‘jaggy’ or pixellated curve in sight. Also, the new Retina display has about 44% greater colour saturation, which means brighter, more vibrant colours. This was particularly noticeable when looking at photos with greens and reds in them, and the extra detail you can see in the photos and video is fantastic.

The updated 5 megapixel camera is a needed improvement, but interestingly, it’s not has high-end as the 8 megapixel version found in the iPhone 2. The camera has 5 lenses and an IR filter, but we didn’t see any evidence of a HDR (High Dynamic Range) mode, like that found on the iPhone 4S. When testing the camera, it was able to pick out faces from the crowd opposite, and put green boxes around them.