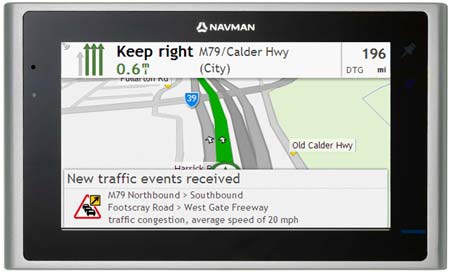 Available from late October 2008 onwards, the Navman S-Series Platinum is a slim and sleek (at only 13.5 mm thick) brushed metal cased GPS unit, with a scrollable “glide” touchscreen, a new interface using Navteq maps and a new intelligent way of searching.

As pioneers in satellite navigation, Navman claim to work hard to exceed the expectations of consumers and we think we’ve done it with a GPS unit that combines great looks, cool technology and unbeatable features.

Navman is about much more than just telling people when to turn left and right, it’s about making it easier for people to find where they want to go, to help them get there safely and then enable them to explore more about their destination.

In a first for Navman, the Platinum range also includes clear 3D lane guidance with junction views appearing on the screen as you approach some major turn-offs, exits or intersections. This, along with the 3D landmarks, really help orientate drivers to their surroundings.

In addition to the sophisticated lane guidance, Navman believes one of the most important and useful enhancements are the premium safety alerts that have been built into the Platinum range. These alerts warn drivers as they approach school zones; highlight certain areas where they need to be more careful (for instance when there are fixed speed and red light cameras) or when approaching railway crossings or accident black spots.

The new range is not just for motorists – pedestrians can take it out of the car and carry it with them. Simply change the mode to “pedestrian” and you get directions for travelling on foot – for example, motorways, turn restrictions, one-ways and blocked passage restrictions are ignored. If a route is longer than 10 kilometres, a warning is given and the 2D city maps represent detailed outlines of buildings including railway infrastructure

There are three modes:

Unlike other GPS models that ask people to search ‘backwards’ i.e. first entering ‘city/town’, then ‘suburb’, then ‘street’ and then finally, building number, the new Navman Platinum range enables people to search intuitively – type in the first part of the address “22 Davies Street” and a range of options for 22 Davies Street appear. Simply glide your finger down the screen and choose the one you want. It makes finding places faster, easier and smarter.