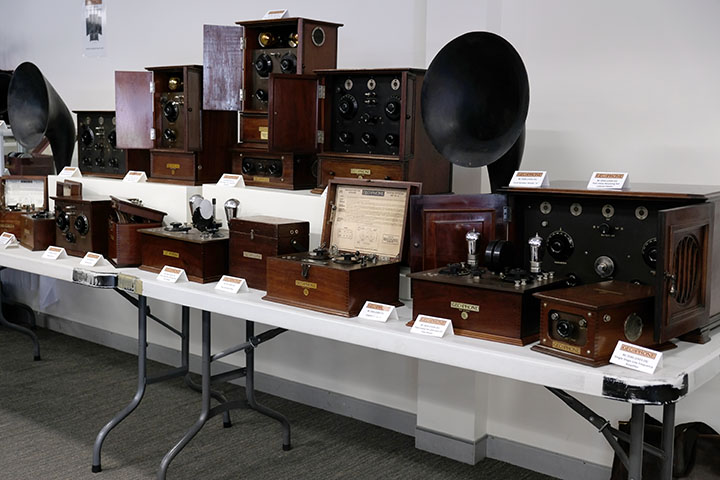 On Sunday 22nd of September, 2019, I immersed myself in the Bakelite and valves and walnut veneer of nearly a century’s worth of Australian historical radios. The occasion was the annual exhibition of the Historical Radio Society of Australia. You could buy parts or whole radios, or simply revel in the history, and occasional beauty, of broadcast radio receivers of decades past.

Here are a few things that caught my eye.

Proper radio broadcasting – with AM modulation on the medium wave band, of course – properly got going in the early 1920s. One of the first players was UK conglomerate General Electric Company, which produced the Gecophone. The one pictured – from around 1922 to 1924 – was representative of the kind of weird things new industries experiment with. Think, for example, region coding on DVDs and Blu-ray. This model was locked to just one radio station: 2FC. I asked if there was some kind of subsidy by the station, but unfortunately no one knows. What we do know is that such arrangements typically fail. Why would anyone buy a single-station radio – in the days when radios truly were luxury goods – when one could buy a radio receiver that tuned into several? Within a few months that model was no more.

So, only one station eh? Why so many knobs? Well, circuitry and components were a little primitive back then. For example, as a valve warms up, its characteristics change. And it transfers heat to other components, so the frequency chosen for a resonant circuit – that’s what’s used to lock onto the AM carrier signal – drifts. So listeners would often be tweaking the tuning and other component controls just to keep the signal centred and avoid irritating high-pitched squeals.

Hacking even back then

Of course, just as there were soon hacks to allow DVD players to cope with all regions and jailbreaking to let people run non-App Store stuff on their iPhones, there were soon services to hack these kinds of locked-in radio receivers. Typically, it just involved literally breaking into the case and swapping over a few components. Because of the drift, such radios still had such things as variable capacitors … just ones with a very limited range. Change to a full range one and any necessary complementary swaps and the radio was fully functional.

Lots of places didn’t have mains power back then. So, a vital accessory was an “accumulator”, or what we’d these days call a rechargeable battery. They’d provide power for a week or two of listening. You’d take it to your local garage or similar to charge up from time to time.

But not all radios actually needed power at all. At one point when I was a child, I was given a child’s “crystal radio set”. My memory is very vague (we’re talking more than fifty years ago), but I seem to recall it had a coil around a former and a ferrite rod that I slid up and down inside that to tune the unit. The output, no doubt through a component or two, fed into a high-impedance earpiece. I remember being frustrated, only occasionally being able to acquire a station, and then only at very low volume. Of course, I knew nothing then about what was going on.

Those sets are unpowered. The energy to drive the earpiece was derived entirely from the radio signal itself. Which of course explains the low output. The thing depends entirely on AM. It won’t work with FM.

For many decades the majority of radios produced for the Australian market were manufactured in Australia. In the days before the displayable station identifiers routinely carried by FM and DAB+ signals, how could you tell what station you were tuning? As the decades passed and regular broadcast stations were established and maintained, and then licensed, radio makers simply put the station names on the dial. Here’s a closer look at the tuning dial of that AWA radio above:

That radio was for sale at the exhibition, incidentally. Cost: $35. Did it work? I didn’t ask. But if it didn’t you could pick up the necessary parts: valves, capacitors, even control knobs:

That’s one of several buckets of cheapies. After something a little more refined? Here are matched knobs in first class condition:

Age is not kind to many materials, not least grille clothes:

No worries, replacements are available:

The radio was a prominent part of one’s décor back in those days, especially if it was a 1940s console model:

But the 1950s and 1950s were times of styling experimentation, especially using the new materials that were becoming available:

I asked Kevin Poulter, President of the Historical Radio Society of Australia, if many people simply replaced the innards of such old radios with modern electronics. Some did, he admitted, but a more common activity is to add a Bluetooth receiver, using the historical amplifier circuitry. Still, there’s no reason why an enthusiast couldn’t sell retro-styled, and “Retro” branded radios, albeit ones with Bluetooth, modern radio tuners and a digital clock:

Here are two rows of Kreisler radios – most definitely not for sale. The back row is from the late 1940s, the front from the early 1950s. Each row consists of the same models, but the coloured ones are rarer and more expensive. Indeed, they cost extra back in the day, which is why they are rarer. The front row models are marketed as “Sealed”.

Sealed? Why sealed? Well, let’s look at the back of some of those early radios:

Ah, ever so inviting to little fingers! Pity about the high voltages in there.

Of course, also on display were a number of record players, most of them early period pieces. One of the most interesting was this 1898 Berliner Gramophone. It was one of the first with a spring-driven motor. This precise unit was already an antique when it was presented to popular Australian baritone singer Peter Dawson in 1948. As it happens, when I was a child my family had a number of Peter Dawson 78s which we played from time to time on a Kreisler phonogram.

And amongst the most intriguing things at the display were a type of speaker I’ve never seen before. They were off-board speakers for radios and phonos, but remarkably stylish, often with some kind of artwork over the front. The trick to making them stylish was to put the workings – the magnet and coils assembly, in front of the cone, instead of behind it as is now the norm.

Are you interested in historical radios? Contact the Historical Radio Society of Australia through its website here. (And you can see our coverage of much more recent radio stuff here.)