The pros and cons of recording media: Part 1 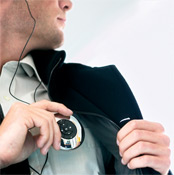 Videotape is an essential for most video enthusiasts, yet while we use it, some of us don?t know much about it. Frank McLeod helps fill in some knowledge gaps.

Modern videotape can be classed as belonging to one of two groups, depending on the size of the magnetic particle used in its construction.

In metal particle (MP) tape, the size of the magnetic particles is greater than 100 nanometres (nm) in length, whereas in metal evaporative (ME) tape the particle length is less than 50 nm. ME tapes now appear to be the most commonly available tape for digital camcorder use, and particularly for MiniDV cameras, so the discussion will be limited to this class. While there might be minor differences between brands, the structure of a videotape follows the same general pattern, with dimensions and layers as follows:

The backcoat or black-coating layer is 1µm in thickness and was first used in the late 60s. An electrically conductive layer that prevents the build-up of static electricity induced by the tape?s motion, it also assists the layers of tape to cling to each other, thus reducing slippage between tape layers coiled on the cassette spindle during storage and transport.

The substrate, carrier or base film layer is made of a complex polyester, either polyester terepthalate (PET) or polyethylene (PEN), and its thickness has reduced to now being about 6 to 14µm. This layer gives strength to the tape but its length is affected by changes in temperature, humidity and tension. These changes are usually minute and largely inconsequential, but become more significant for archival use. PET is said to be chemically stable and long lived if stored in a stable, cool and dry environment away from ultraviolet radiation.

The magnetic layer, at less than 200 nm in thickness, is a ?complex mix of magnetic particles, binder, lubricant, head cleaning agent, surfactant and other special chemicals.? according to the Association of Moving Image Archivists (AMIA, www.amianet.org). Manufacturers have their own ?recipe? for this mix and it can be a closely guarded trade secret which may well change over the years that a particular product is on the market. The AMIA emphasises the point that this makes predicting the life expectancy of any particular videotape rather dicey. Their reasoning is that it cannot be said for certain that this year?s production is chemically identical to that of two years ago, even though sold as the same product.

About 40 percent of the volume of the magnetic layer comprises the actual magnetic particles.  Over time, the composition of this material has changed from being basically iron oxide to more complex metals/metal mixes (eg. pure cobalt or cobalt-nickel alloy) with a corresponding increase in the magnetic strength or ?coercivity?. The density of information that can be stored, the difficulty of tape erasure and, presumably therefore, the degree of long-term data integrity, relates directly to the coercivity of the particles used in the magnetic layer.

ME tape has a so-called ?hard overcoat? or diamond-like carbon layer of less than 50 nm in thickness placed over the magnetic layer, with the whole then covered in a final lubricating layer. MP tape has no such covering, with its magnetic layer having only the lubricant applied over the top.

The lubricant layer tops it all off. This is the layer, in combination with the binding agents in other layers, that can cause the problems, as discussed below.