The pros and cons of recording media: Part 2 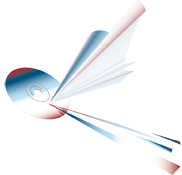 Part 1 of Frank McLeod?s investigation into recording media was enthusiastically received. Part 2 is specifically tailored to DVDs and touches briefly on CDs.

Most if not all of us have used CD and DVD blanks, usually with success. However, it would be the unusual individual who did not admit to the production over time of enough dead blanks to make a collection of large coasters, mobiles for the baby?s room or bird scarers in the garden. Until I started looking into it, I was unaware of the layers of complexity that have gone into getting us to the stage we are at with this technology. While centering on DVDs, much of the following detail is applicable on some level to CDs as well.

While the acronym DVD was originally said to stand for Digital Versatile Disc, many circles now concede that it stands for nothing in particular other than to name the object which is the topic of this discussion. (Don?t blame me for that piece of circuitous navel-gazing – I simply report what I have found.)

The single-layer single-sided DVD (also called DVD-5, probably by the same people that decided DVD stands for nothing, but which I will call SSSL) is the simplest in structure and a good place to start.

The SSSL disc has five layers if the label is included. In essence, it is a 12 cm diameter sandwich made up of two ?slices? of polycarbonate ?bread? with a filling of a bonding and reflective layer in between. In commercially mass-produced DVDs, the reflective layer is a thin layer of metal, often aluminium, on which a series of pits are pressed during manufacture and which cause alterations in the angle of the laser that reflects back to the sensor where it is interpreted as a series of digital signals.

In recordable single-layer DVDs, there is a dye layer interposed between the lower polycarbonate layer and the reflective layer. The recording laser burns small areas in this dye, causing it to ?change phase?. This alteration in its state increases the ability of the playback laser to pass through the dye layer and be reflected from the overlying reflective layer. It is the manner in which this light is reflected that is interpreted by the playback head sensor as a series of ?0?s or ?1s? or ?ons and offs? and so the digital signal is created.

Although the visible spiral burn, from the centre out, that occurs in first-layer recording is due to the laser altering the reflectivity of the blank by its effect on the dye layer,  it is in fact following the path of a pre-determined groove. At the beginning of this groove, at the centre of the disc there is wobble which helps line up the laser into the pre-groove immediately prior to the commencement of burning.

Whereas a dual-layered commercially pressed disc has two pressed reflective layers separated by a bonding layer, dual-layered recordable discs have two dye layers separated by an transparent spacer with the lower layer tagged Layer 0 and the upper Layer 1. Layer 0 is backed by a semi-reflective layer whereas the other dye layer, Layer 1, has a full reflective layer behind it. The difference in these reflecting layers allows the lasers to focus on the respective dye layers. Dual-layer discs begin recording at the hub on Layer 0 and when they reach near the edge of the disc, the laser is re-focussed on Layer 1, which is burnt from the rim into the hub.