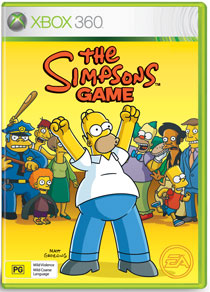 If you had to sum up the new Simpsons game from EA – cunningly called ‘The Simpsons Game’ – up in one word, that word would be ‘fun’. If you had to use another word, you couldn’t go too far wrong with ‘authentic’ because, thanks to publisher EA’s extensive coffers, the real-life cast and real-life writers have been put to work on the game, lending it their voices and writing talents, producing a stellar videogame representation of the cartoon in the process. So, as the saying goes, if you’re a fan of the cartoon series…

Right from the start, The Simpsons Game treats the player to gorgeous-looking visuals, fun gameplay and the trademark humour of the cartoon, complete with a dumb but perfectly suited storyline and loads of funny dialogue. Every last detail of the game has been thought through to produce a game that is as authentic and faithful to the TV show, rather than shoehorn the characters into a standard run-and-gun or platformer game. For example, each of the Simpson family characters has a different ‘power’ or way of attacking, solving puzzles and influencing the action: Homer, as you might expect, relies on his revolting bodily functions and turning into a big blob, or ball, when he sees fit, whilst the pacifist Marge recruits others to her cause by yelling at them and makes them do her dirty work for her – although that dirty work often turns out to be cleaning!

Continuing this theme of authenticity, the strong link to the cartoons is maintained with frequent pop-up appearances by Comic Book Guy to alert you when you do something really clichÃƒƒÃ†’Ãƒ‚Ã‚Â©d, such as a double jump (made famous by videogames like Super Mario) or ‘taking two losers’ to make a pressure pad work, as seen in abundance in recent game The Fantastic Four. In another instance, completely ‘in character’ with his TV counterpart, Homer falls asleep if you leave him standing still for more than a few seconds!

In fact, The Simpsons Game is chock-full of references to other videogames or videogame conventions. A game store in the ‘base’ level is dubbed ‘Sequel Stop’, one chapter is called ‘Bartman Begins’ and Bart even has an Xbox 360 controller-shaped belt buckle. EA themselves aren’t spared either – there’s a funny sequence later in the game featuring an EA exec, but we won’t ruin it for you!

The bulk of the action takes the form of switching between two Simpson family members (or controlling them together in split-screen mode, thanks to a great drop-in, drop-out two-player co-op system) and using their specialised abilities to fight, collect, or adventure. Thanks to all those ‘tributes’ to other videogames, this action is continually and delightfully varied, avoiding the usual pitfall of mundane repetition found in many games based on licensed properties. The Simpsons Game captures the spirit of the TV cartoon series perfectly, is a lot of fun and absolutely perfect for younger players (but will still entertain older gamers). As Homer says in the game, “That’s how I roll”.