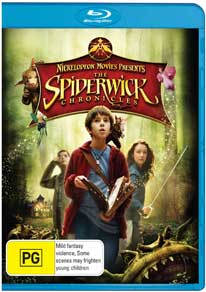 Releasing the same day in both Blu-ray and DVD versions, The Spiderwick Chronicles succeeds in spite of its obviously cynical, marketing-led genesis (Come on people! What’s going to be the next big Harry Potter?! Think!) by providing a genuinely entertaining, well acted and alluring transfer from the books to film.

Led by the competent portrayal of a sullen and thoroughly unlikeable ‘dominant twin’ Jared by Freddie Highmore (he also plays his more likeable, boffin brother Simon), the film describes a surprisingly scary adventure that sees the family newly moved into a batty relative’s house out in the boonies.

Needless to say, the place is beset by mystery and, once the source of the mysteries start to reveal themselves, the previously sluggish drama accelerates into a fun voyage of delighted – and frightened – discovery that parents will enjoy as much as their kids.

In fact, this intelligent kids’ film may even genuinely scare really young viewers, so get the cushions ready to hide behind.