The Wii is the one for Dad! 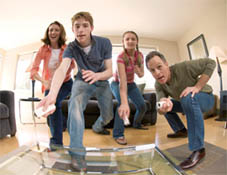 The Xbox 360 might be cheaper now, and the Playstation 3 has a Blu-ray player, but for a console with games your father might enjoy you probably can’t go past the Nintendo Wii. The games are easy to grasp, can be played with the rest of the family and can even provide a little exercise while being played.

Of course, like portable MP3 players, consoles have the advantage of opening the doors to a whole range of future gifts as well. There’s games, of course, and we’d definitely recommend the Wii Balance Board and Wii Fit, which can be combined into a fun fitness regime for all the family. The balance board can be used to measure and record various exercises, and there are even games that can be played using it.