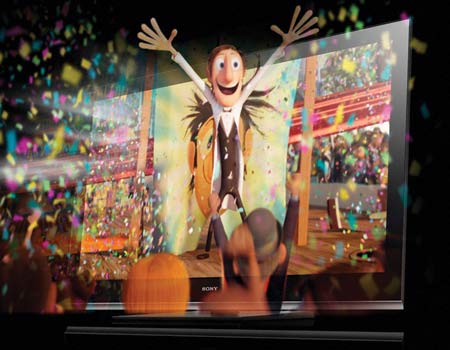 It’s the month before Christmas as I write, but the big electronics nameplates have already been promoting their Xmas deals. LG is bundling select model 2D televisions with an Xbox 360 and Kinect motion controller system; Sony is pairing select television models with camcorders, cameras and sound systems from its stable; Panasonic is including a 3D Blu-ray surround sound system with some of its 3D TVs and has the exclusive on the 3D version of Avatar, while Samsung is throwing in a 22 inch LCD TV, four 3D Blu-ray movie titles and four pairs of 3D glasses, plus a 3D Blu-ray player  on some purchases.

Toshiba trumps them all, though, with a 3D Blu-ray player, 3D Blu-ray discs, four pairs of 3D glasses and a 22 inch TV for the study when you buy its 3D TV. And in the short week between being advised of the set’s $4200 asking price, we’ve seen it instore for $3600.

So the home entertainment industry wants Australia to stay at home and watch TV this summer, and it wants us to do it with a 3D TV. That’s because the big electronics names make a way bigger margin on 3D televisions than they do on conventional 2D sets, with Gfk sales data to September 2010 showing that average selling prices on the former are around $2700, while the former are $849. In short, that means retailers and suppliers can sell a 3D TV for three times as much as a 2D model.

Australians have been taking the hint too, buying more than 40,000 3D-ready televisions in the seven months since the technology debuted in March 2010. Samsung says its has around 89 percent of these sales, and as first to market with the greatest number of models, this probably isn’t far wrong.

So there’s momentum in 3D, and this pokes something of a blunt burnt stick in the eye of the technology naysayers. Granted, 3D is still some way off becoming mainstream, but early indications are that it will take off.

Which brings me to an excellent article by the chief technology editor of EH Publishing, Stephen Hopkins, as published on the US-based Electronic House website. In it he provides ten very sane reasons explaining why 3D is here to stay, and while I recommend reading the full article*, below is a paraphrased and abridged version of his responses to some of the most common arguments against 3D.

1. Glasses. People willingly wear ill-fitting 3D glasses in public places such as the cinema, so why wouldn’t they wear them in the privacy of their own home? Besides, 3D glasses are only an interim necessity until autostereoscopic technologies currently in development mature.

2. Nothing to watch. Surround sound, CD, DVD, HDTV – in the audio-video arena, hardware always arrives first. Once software catches the lag, customer investment moves from early adoptor trickle to mainstream flood. In short, if they build it, we will come.

3. Discs are dying, so will 3D. Content in 3D isn’t dependent on a physical media for survival. Like surround sound and high definition video, it too can be stored on HDD or in the cloud, or injected in the home over broadband pipes.

4. Lessons from history. Hardware accommodates new technologies, and we either upgrade right away or do so through attrition. Those people who said they didn’t need DVD, or surround sound or a HD flat screen TV now have them in their homes, and the pattern will repeat with 3D.