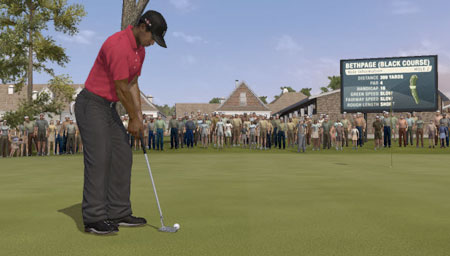 As you hear the roar of the crowd from the next hole over, can you handle the mounting pressure while you stand over your tournament-winning putt? Expanded crowds surround every hole; adding to the tension and excitement of each shot. A first for the franchise, real-time weather will be reflected on every course, ensuring the in-game experience matches that of the current weather conditions. Tiger Woods PGA TOUR 10 will also feature a television broadcast style presentation, which include instantaneous updates and a new announcer team of ESPN’s Scott Van Pelt and the Golf Channel’s Kelly Tilghman.

Tiger Woods PGA TOUR 10 on the Nintendo Wii will support the all-new Wii MotionPlus accessory, which brings an authentic sports motion to your golf swing; including the ability to draw and fade. Whether it’s opening up your clubface to take on that dogleg or tap in that five-foot putt – Tiger Woods PGA TOUR 10 with the Wii MotionPlus is like bringing a golf simulator to your living room.

This year’s 2009 U.S. Open course, Bethpage State Park (Black Course), will be available on the Xbox 360, PlayStation, PSP and Wii versions of the game. The USGA’s U.S. Open courses are known for being the toughest test in all of golf, and in Tiger Woods PGA TOUR 10 golf fans can expect the same major championship conditions as found in the real world.

AS mentioned above Tiger Woods PGA TOUR 10 will be available on the Xbox 360, PlayStation 2 and PlayStation 3, the PSP (PlayStation Portable) system and Wii.

At the time of writing no pricing details have been finalised.