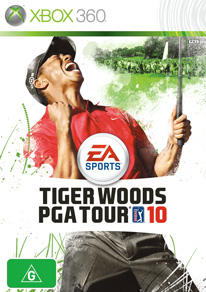 Tiger Woods PGA Tour 10 is a very difficult game to judge this year for us, principally because it presents such a dilemma. On the one hand, it offers far and away the best console game of golf available, with a few small improvements over last year’s game that are, nevertheless, pretty attractive. On the other hand, several major areas in dire need of improvement have apparently not even been touched, so the overall effect is that the game appears virtually identical to the previous outing. So, in short, we think that Tiger Woods PGA Tour represents a much better buy for gamers new to the series than anyone who’s bought and played the last couple of Tiger games.

For a sports simulation game, EA doesn’t appear to have even attempted to address some of the problem areas that really detract from the overall experience. The dreadful repetition in the commentary is outclassed by its dire accuracy. The commentators consistently contradict one another, so you hear ‘still going to be a long, long way from home, Kelly’ from one of them followed up immediately by ‘that was a great shot’ by Kelly herself as the ball sails directly towards the pin and goes inside the challenge circle for a very short putt! You hear the same old catchphrases and comments from last year, despite a change in the male commentator, from the dour Sam Torrance to ESPN caller Scott Van Pelt, and for a feature that EA touts in its promo videos with “you’re really going to feel like a part of the PGA tour”, this loss of credibility puts a serious dent in the title’s ambitions.

Several other problems appear to have made it over intact from last year’s game, too. Sometimes, an 8 kph wind will move the ball in the air far more dramatically than a 28 kph one blasting from the same direction. Shooting for the hole, you’ll also find that the ball stops miraculously right on the edge of the cup more often than seems natural, or even fair. The commentary clearly only triggers responses based on distance, blithely ignoring the difficulty of the putt, so you may also be treated to a vaguely insulting comment at the same time (we recommend you turn the sound option right down to zero in options). The spectators are robotic and eerily synchronized, and you still can’t save during a round!

And for veteran ‘Woods games fans, it’s a real blow initially to discover that all your hard work slogging through PGA Tour 09 is for naught when it comes to your player character this year. You start from scratch , ground zero – itself a real nonsense, given that you’re presumably good enough to make the cut for the tourney but somehow considerably less able than everyone else in the competition – with all your performance ratings really average and no acknowledgement of your loyalty.

And yet Tiger Woods PGA Tour 10 plays a really entertaining game of golf. Aside from the putting anomaly, the controls are tight in play and incredibly flexible if you want to change it up. The presentation is immaculate; EA Sports craft some great games and this is no exception, with great golfer animation, a huge number of play options and the mad degree of customization available. There’s a strong emphasis on online play, which can be entertaining (particularly the simultaneous multiplayer option) and the inclusion of weather this year – a glaring omission from previous outings, given the critical role it can play in the real game – is really welcome, too.

But next year, EA Sports, forget the fluff. Work on the commentary, because it really lets the side down in terms of immersion and credibility. Remove the ‘cup-lip balancing act the ball seems to enjoy so often. Sort out the crowds, so they don’t look quite as creepy. And, unless you want them to leave your next barely-there update on the shelves next year, pay some lip service to your loyal fans and at least give them the option to carry over their player and player stats into the ‘new’ PGA Tour 11 game; otherwise they’ll just stick with this version. Some of these complaints will be meaningless to you if you’re new to the series, but if you’re an old hand at the Tiger Woods games, take at least half a star off the overall score.