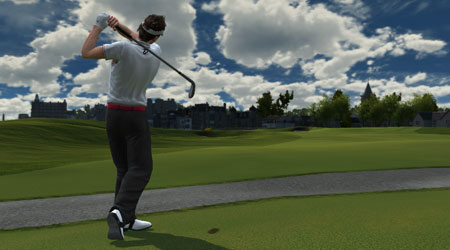 Dragged out for another round at a time when he probably has far more important matters to attend to, Tiger Woods is back as poster boy for EA’s solid but underwhelming golfing game, in ‘Tiger Woods PGA Tour 11’. This year’s game is undeniably solid, producing a sound golf simulation while imbuing every facet with their trademark EA Sports high production values, but, as usual, the team seems to have focused on the wrong things, fixing things that weren’t broken and ignoring easy changes that would immeasurably improve the game.
You still can’t save your progress mid-way through a round, for example, which in a four-ball is extremely tiresome, forcing you to watch the unnecessarily-prolonged ‘teeing-up’ animation for each golfer before you can skip past to your go and having to complete a round, which can take well over a real-time hour, before you can take a break. The commentary – from  Kelly Tilghman in particular – has absolutely no virtual recall, so sounds exactly like what it is, a string of pre-recorded soundbites made in absolute isolation and without any sense of continuity from hole to hole, significant damaging the suspension of disbelief.
A new competition, in the form of the Ryder Cup, which can also be played with up to 24 players online – is undoubtedly a great addition and the evolution of the virtually unlimited spin and power-up plus the too-handy putt preview functions into a ‘Focus’ meter that depletes as you use these ‘cheats’ is actually well considered, forcing the player to play with more skill and rely less on these ‘buffs’ to their game. Another new addition, ‘True-Aim’ changes the Tiger Woods gold fame in dramatic fashion, removing the aiming circle from your arsenal of game aids and giving, instead, just club lengths and a general view of the green. Your only indication of shot direction becomes a simple arrow, and the game camera follows the ball’s trajectory as if you were watching it in real-life from back where you hit it, rather than provide the TV-style ball tracking from previous games. This really is a decent evolutionary idea for the game, making it feel closer to the real thing for advanced players and providing a much stiffer challenge.  But most of the new stuff in this game is tweaking and doesn’t enhance gameplay in any way whatever.
Putting yourself into the game via ‘EA Game Face’ is still a horrible hit-and-miss affair – carefully following all the guidelines for taking the pictures, I ended up as a rather handsome African American guy who looked considerably younger than I do in real life – not a bad result, but not too accurate, either. Most vexingly, and almost a game-breaker for me, having played every Tiger Woods game EA has ever made, EA Sports still doesn’t reward customer loyalty by recognising save games from previous Tiger installments and, for instance, boosting the stats on your created player from the get-go. The net result being that you have to start from scratch, with abilities far below every other player in the tournament, if you choose to play with your created guy rather than take the soft option of using Woods throughout the game and trawl through the game for many hours just trying to reach a decent, competitive level. Not only is it a bit of kick in the teeth to veteran Tiger Woods players, but it doesn’t make an ounce of sense: if you’re good enough to make the cut for a major pro tournament, you shouldn’t be starting with only 40%, say, of the average skill set. And, frankly, if having to work your way up from nothing every….single…..year…..when you buy this game is considered to be appealing at EA HQ, it’s definitely time for some fresh thinking.
Our recommendation for EA? Save the money spent on the useless videos, the lackluster commentary team and even Tiger’s endorsement, and put some effort into making the game play experience more exciting and engaging. And for you? If you have any of the other Tiger games, don’t bother with this one.

Max Everingham is the owner of Game State, a B2B videogame software analysis & marketing consultancy. Max is a videogames veteran, having worked in the industry since 1996, including senior brand & product marketing positions at EA and Codemasters.
Overall
Performance
Design
Reader Rating0 Votes
2.7