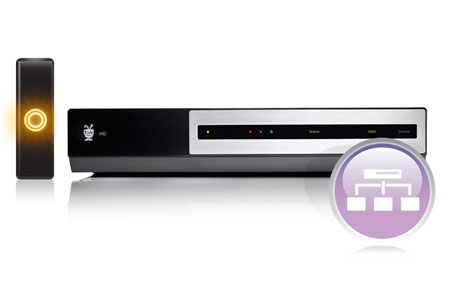 When Tivo made its Australian debut last July it was billed as much more than just a replacement for your VCR. With internet connectivity and an expansion slot for an external hard drive, the digital video recorder (DVR) was pitched as a media hub for the modern home.

In our initial review of Tivo last year, we wrote that we liked its easy-to-use interface, twin HD tuners, free EPG (provided you have a broadband connection) and upgradeability – Freeview-endorsed, it supports MEPG encoding to accommodate any transmission changed the broadcasters might make. We were critical, however, of a number of elements too. At launch, it lacked many of the features that US Tivo users enjoyed, and provided only limited networking options and hard drive recording capacity.

Over time, promised the box’s backers, Channel 7’s Hybrid Television Services, new features and services would come online connecting the Tivo box to a world of entertainment, as well as your PC. Those new features were slow in coming, the first online content – a Sunrise-branded weather report and trailer for other Seven shows – seemingly supplied by the network’s marketing department rather than anyone in programming.

More recently, Tivo’s programming has diversified to include podcasts and video on demand, while a long-awaited Home Networking Package and expansion drive allow Tivo users to hoard shows and share them with their computer. So, one year on from launch how does the new and improved Tivo stack up?

Let’s start with the online content. Tivo is capable of delivering hundreds of internet radio stations and thousands of podcasts from around the world into your living room. What you actually get is that day’s breakfast program from each of the Nova and Vega stations around the states, plus a smattering of other shows. Ideal for those who don’t own a radio, or enjoy listening to the breakfast show without the distraction of music – which is edited out.

The Blockbuster video on demand service also comes up short, the 100 title library (standard defintion video only) dwarfed by the thousands offered by BigPond Movies at the same $3.95-5.95 price. You also need to commit $35 upfront to open your movie download account. On the plus side, the 1-2GB files can be scheduled to download at 2am to take advantage of off-peak times from your ISP. You get 14 days to start watching and 48 hours to finish once you press play.

Comparisons with the wealth of content available in the US (where Tivo owners pay subscription fees) may be unfair, but Aussies are definitely getting shafted when it comes to PC connectivity. The Yanks can download Tivo Desktop for free and stream photos and music from their PC or Mac to their Tivo. For $US24.95 they can upgrade to Tivo Dekstop Plus and transfer video files between their Tivo and PC. To do any of that, Australians have to pay a whopping $199 for the Home Networking Package (it’s free with the purchase of two or more Tivos and $99 with the purchase of a single Tivo). Mac users must stump up another $179 for Roxio Toast 10 Titanium to use all the functions.

Is it worth the expense? Not for the streaming alone. If you have an iPod you already have a faster, better way to enjoy music and photos in your living room – or any room. And iTunes users beware: Tivo cannot read AAC files.

The news is better if you’re looking to jailbreak recordings from your Tivo and watch them on your PC or portable device. With Tivo Desktop Plus you can suck shows into your Documents folder and easily reformat them to view on an iPod, PSP, Nokia phones or other devices. Season Pass recordings can even be automatically transferred and reformatted, so last night’s TV is ready to copy to your iPod the next morning.

You can also move videos in the other direction, setting up watch folders so files get dispatched to your living room as they’re downloaded to your PC. We could pretend that this is solely so you can watch home movies on the big screen, but with Xvid compatibility the feature is clearly designed for the BitTorrent generation. Despite the copyright warnings, even the software’s user guide shows a DVD rip of Vicky Christina Barcelona being transferred. Just don’t tell Blockbuster.

If you are planning to copy a whole library of ‘home videos’ from your PC, you’ll need the Western Digital My DVR Expander, a 1TB external hard drive that also increases Tivo’s recording capacity to 230 hours of HD or 460 hours of SD footage. The drive is made exclusively for use with Tivo: it won’t work with your PC and nor will a standard external hard drive work with your Tivo.

The exclusive partnership prevents you sharing Tivo recordings with another DVR or PC without paying for home networking privileges. To reinforce the point, every recording you make is split between the expander and the Tivo’s internal hard drive: disconnect the two and you lose your recordings.

Again the drive comes at a price. At $299 the expander is a $100 more expensive than a standard terabyte drive for your PC, meaning all of Tivo’s new features are either overpriced or underwhelming. The TiVo device digital video recorder as a standalone device is terrific, and its EPG is peerless in its design and ease-of-use. But tot up the price of the recorder, networking and storage and you’re paying $1,200 or so for a home media solution that can be found elsewhere for about $200 to $300 less.

Just to clarify, the price given at the top of this review is reached after adding up the following components:

At the time of writing you are able to buy a bundle including the TiVo PVR, the wireless broadband adapter and the Home Networking Package, online from the TiVo website, for $867.92, a discount from the regular price of $968.