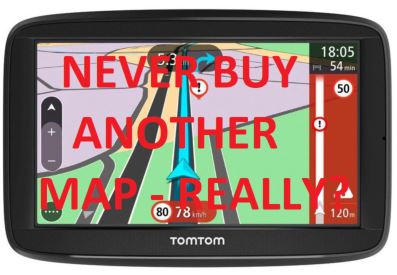 GPS satellite navigation manufacturer TomTom has apparently reneged on its “Life Time Map Updates” for nearly 66* of its devices relying on its interpretation of what the phrase means.

Its definition, in fine print on the announcement, is, “Lifetime means the useful life of the device, i.e. the period of time TomTom supports your device with updates, services, content or accessories. A device will have reached the end of its life when none of these are available any more.”

To add insult to injury, it lists a web URL for more information that does not even exist. “You need a PC with an Internet Connection and a MyTomTom account to download new maps and updates. For more information, visit tomtom.com/lifetime.”

We found eventually found a relevant web page where it further limited the usefulness of the offer, “The map updates are the full updates for the map that is preinstalled on your device, or that is installed on your smartphone app. The geographical coverage and feature support in the map will continue to match the original version, as long as the original is commercially available.”

Apparently, you have to buy a model with ‘Lifetime World Maps’, but then it’s only for the life of your product, and that is at TomTom’s sole discretion.

* According to BBC News some of the models are still available at retailers.

No matter how well built a TomTom navigation device may be its useless without recent maps.

Point in case my adult daughter has a 6” TomTom Go 6100 – about three years old. When she comes to Sydney, I update the maps for her (as GadgetDads are wont to do).

This time we had awful problems. First, I downloaded TomTom MyDrive software onto a Microsoft Surface Pro 2017. I plugged the TomTom into the USB 3.0 port, and no matter what I tried the MyDrive software alternatively did not recognise it or if it momentarily did, immediately the update fell over.

Then I tried a Surface Book – same issues. Then an HP Spectre x360 – ditto. The only things these had in common were the MyDrive software, Windows 10 and the USB 3.0 (blue) ports. On a hunch, I resurrected an old 2011 Windows 7 HP Elitebook with USB 2.0 ports, downloaded the MyDrive, and it updated. What three-year-old GPS won’t update from a recent PC with USB 3.0 ports?

But to add further insult to injury, the maps sent her off on an entirely wrong course ending up in dead-end streets or with no right/left turn signs preventing ingress.

I use a Garmin Drive Smart 70 (similar vintage) so to be fair I replicated the same conditions. It updated flawlessly on the Surface Pro 2017.

I then drove the same route as selected by the TomTom and the Garmin was flawless. So not only do TomTom have convenient interpretations of its fine print, but its maps are not very good either. TomTom crow that it is the only independent map maker left after Here was sold to Audi/BMW/Daimler.

“You will receive map data updates when and as such updates are made available on Garmin.com during the useful life of compatible Garmin product or as long as Garmin receives map data from a third-party supplier.”

“A product’s “useful life” means the period during which the product (a) has sufficient memory capacity and other required technical capabilities to utilize current map data and (b) is capable of operating as intended without major repairs. A product will be deemed to be out of service and its useful life to be ended if no updates have been downloaded for such product for a period of 24 months or more.”

This is a lot clearer than TomTom and sets the parameters – not leaving it up to some faceless Dutchman to determine if a product is out of date and you should buy a new one!