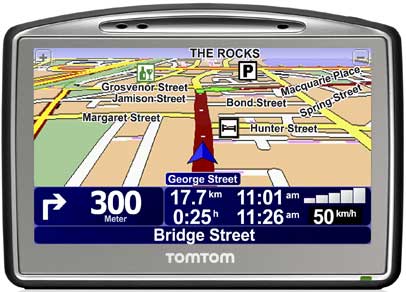 With the ONE XL, TomTom have reworked their entry-level GPS system basically just by stretching it out into a widescreen format. It’s a solid GPS system that’s very easy to use, but the lack of real widescreen features does little to justify its asking price over the cheaper and smaller TomTom ONE.

The ONE series has always been focused on simplicity, and there’s no major changes with the ONE XL. There’s only a single button for powering the unit on, a single SD card slot for storing map data and a USB connection for recharging purposes.

The technology that underlies the ONE also hasn’t changed at all. It’s still running the same SiRFStar III GPS chipset as the older ONE, with the same 32MB of onboard memory and the exact same TomTom interface. Where the ONE XL differs is in the screen, which is a wider format (and thus larger) than the older ONE. It offers Bluetooth, but not quite in the way that you’d think. Instead of enabling you to go hands-free with your mobile – a very popular feature for GPS units – it instead is used to access premium TomTom Plus services via your mobile.

TomTom is the company to beat when it comes to ease of use with GPS navigation, even if you’ve never used a GPS before. As the ONE XL uses the same familiar and easy to learn interface, from a basic functionality point of view, it scores highly with us. We tested the unit through some tricky Sydney driving, as well as on a longer road trip to the Hunter Valley. The ONE XL worked well, with quick positional synchronisation and good rerouting when we moved off the proscribed pathways. Our one caveat here is that you’ll really need to pack the in-car charger for longer trips; we found the battery display started warning us after only an hour’s operation on full charge, which is well down on the claimed two hours of battery life — and frankly, that’s not that great to begin with. Thankfully, the ONE XL will recharge from any USB socket.

On the one hand, the ONE XL is a competent and effective GPS system that does what it says on the box; it routes you efficiently to where you need to go. On the other hand, it doesn’t really do anything with the extra screen space it offers, doesn’t offer true Bluetooth hands-free modes, and has a battery life that’s rather average, to put it nicely. If you find the smaller screen on the ONE a liability, then by all means buy the XL, but otherwise the smaller and cheaper unit is clearly the way to go.

Overall
Features
Value for money
Performance
Ease of Use
Reader Rating0 Votes
Widescreen display, very easy to use.
Doesn't do much with the extra screen space, average battery life.
3.8