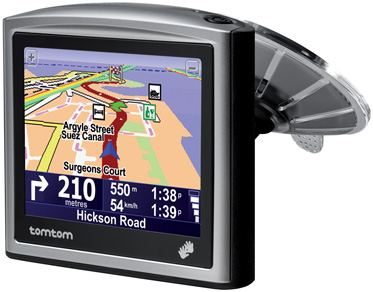 TomTom’s previous GPS units have always been functional little units, but you could never really call them attractive; they were bulky little boxes that worked well but wouldn’t have looked out of place on an oil rig. With the ONE, TomTom bares the feature set down to just the basics, but at the same time, it also offers a significantly slimmed down and more attractive unit that’s actually possible to carry around for pedestrian navigation duties.

The ONE is a simple GPS, running as the others do on the SiRFStar III chipset with 32MB of internal memory, and using the same Sensis map data as all the other major vendors do. Maps are stored on a supplied SD card, and the SD card slot is only used for map dataÂ – unlike higher-end units that use SD memory for music or other fun activities, this is a single purpose GPS. Like the Navman F20, the one thing you’ll have to do without with the ONE is an AC charger; your only in-box options are a USB cable (for PC charging) and an in-car cigarette lighter-style charger.

The ONE is entirely touchscreen based, using the same kind of interface found in other higher-cost TomTom products, as well as other GPS systems that utilise the TomTom software, such as HP’s iPaq RX5965. In our tests it quickly and accurately determined our position, and did very well at tracking it to boot. Many GPS systems can lag behind your actual position by a few metres; this isn’t a problem on long stretches of essentially straight track, but if you’ve got to turn and twist through multiple city streets it can become a real problem keeping to the assigned route, and this was never a problem we encountered with the ONE. If we wanted to get picky, we’d comment that the startup volume of the ONE is quite loudÂ – and it’s a testament to how easy the ONE is to use that that’s the most damning criticism we can come up with about it!

The ONE covers the entry level GPS market for Tom Tom, but not in a way that suggests that it’s just a unit that the company has thrown out there to cover a gap; this is a nicely featured GPS that’s simply a pleasure to use. It’s cheaper than many entry-level GPS units (although not quite as cheap as Mio’s P350 or Navman’s F20) but offers an experience that’s up there with the high-priced players.