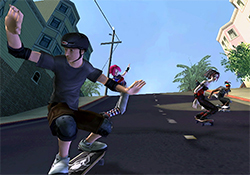 Experience the breakneck speed and blazing acceleration with Tony Hawk?s Downhill Jam for the PlayStation®2 computer entertainment system, available from Activision, Inc. Shipping now to retailers nationwide, the game, which originally debuted on the Wii?, combines signature Tony Hawk gameplay with the blinding velocity of downhill skateboarding and features four new single player events, three new multiplayer modes and three new playable characters.  Tony Hawk?s Downhill Jam for the PlayStation 2 system was developed by SuperVillain Studios and is rated ?M? (Moderate Violence) by the OFLC and has a suggested retail price of $49.95.

In Tony Hawk?s Downhill Jam players take on the role of Tony Hawk or one of 12 characters to compete in specific time-based challenges in one of three gameplay modes including race, trick and slalom.  Gamers can also challenge friends in head-to-head competitions as they pull off a variety of high-velocity stunts and crashes in living, populated environments filled with cars, pedestrians and buildings.