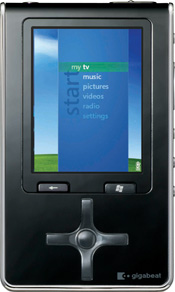 If you’re an aficionado of Microsoft’s Media Center PC concept – either in the older Windows XP or new Vista variants – then the Gigabeat S is undeniably the portable media player for you. It’s the portable equivalent of the Media Center, right down to the look and feel of the interface. If you’re not a Media Center user, however, it’s a less interesting and quite frankly chunky looking player.

The key hook for the S60 has to be the tight integration with Windows Media Center, right down to the way that the interface works. Controls are minimalist, with a cross-based directional pad that moves down a small list of content types – TV, Music, Pictures, Videos, Radio and Settings – in the Media Center font. If you’ve got a Media Center PC, this makes a lot of sense, as you can easily synchronise any Media Center content – including TV recordings – with the Gigabeat S. That’ll help fill up the player’s 60GB of storage space, unless of course you do happen to have 15 000 tracks just lying around waiting to be heard.

File synchronisation is handled by Media Player 10, which is bundled with the Gigabeat; by default it’ll try to update you to the recently released Media Player 11, so be prepared for a somewhat lengthy download and install process when first setting up the Gigabeat S. The upside to this wait is that the Gigabeat is fully compatible with Microsoft’s digital rights management software for audio and video, so anything using it – normally labelled in Australia under the “Plays For Sure” branding – will work with the Gigabeat.

The Gigabeat S’s four-way control isn’t the flashiest to look at, but it gets the job done for simple track selection in a clean and mostly efficient manner. A little experimentation yields rich fruit – like most good portable music players, the Gigabeat S is simple enough to use for the most part without reaching for the manual.

The Gigabeat S lasted just over 10 hours in our music playback testing. That’s not an inconsiderable amount of playback time, and well within shooting distance of Toshiba’s claimed 12 hours, but given that this is a large player, comparatively speaking, it’s a touch on the low side.Â  Likewise, the 2.5 hours of continuous video playback will see you through most movies on a trip, but you’ll then have to find another source of distraction, as the Gigabeat will be totally flat.

The Gigabeat S is a nicely functional portable media player that’s best suited to the existing Media Center crowd, as the way it integrates in with a Media Center PC is particularly appealing. If you’re outside that particular world, however, it’s a less interesting prospect.