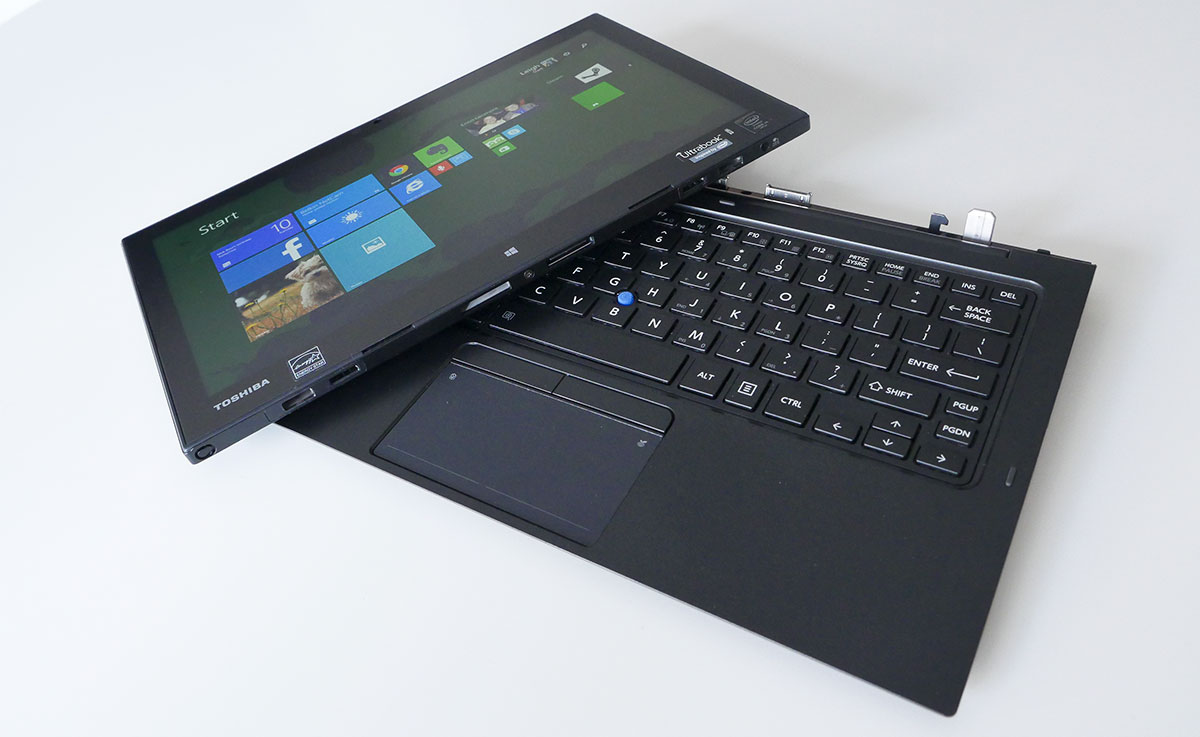 Toshiba has always had a strong presence in the laptop market, practically inventing the category, and a couple of years ago we saw a sign that the company was doing its best to find a middle ground for the tablet and laptop hybrid section. Fast forward to now and we think Toshiba might have found the balance with the Z20t.

There are plenty of hybrid computers out there, and Toshiba’s latest joins them with a new Intel processor, a new design, and two batteries to help make a machine aimed at lasting a full day of work.

There are two sides to this computer, though, with a tablet screen section and then a keyboard and battery section, and both are there in the box, so no need to buy extra bits to make the machine complete.

We’ll start with the tablet section, though, because that’s really where everything is on this model, the Portege Z20t.

Here in the tablet section, you’ll find a 12.5 inch In-Plane Switching (IPS) display running the Full HD resolution of 1920×1080 and producing a pixel clarity of 176 pixels per inch. An anti-glare sheet has been applied to this screen, which also supports touch and pen interaction, meaning it is now a matte display. A variant of Corning’s Gorilla Glass also protects this screen, helping to stop the odd scratches here and there.

Under this display, you’ll find Intel’s “Broadwell” processors from the fifth-generation, with the Core M chips available here. Our review model relied on a 5Y71 processor, but you can find different variants around the place.

Memory is paired with this processor at 8GB (though a 4GB version can be found), with the storage offered through solid-state drives, either a 128GB or 256GB option. Microsoft’s Windows 8.1 Pro comes installed out of the box, though we’re told you can find Windows 7 on these models, too.

Cameras are also here, with a 2 megapixel camera up front working alongside two microphones and what Toshiba describes as an “Advanced Light Source”, while a 5 megapixel camera can also be found on the back.

Then there’s the keyboard dock, where you’ll find a full keyboard, two mice — trackpad and Accupoint nib — and a battery built inside.

Connections are fairly well catered for, though, with ports on both sections — tablet and keyboard — and wireless connections, too.

For the wireless, you’ll find support for 802.11ac as well as the standard 802.11a/g/n, while Bluetooth 4.0 is also provided. Hard ports come in the form of a microUSB port on the side of the tablet section, also sitting alongside a microHDMI, 3.5mm headset jack, and a microSD expansion slot, while the keyboard dock sports two USB 3.0 ports, Gigabit Ethernet, HDMI, VGA monitor, and the AC adaptor port.

A lock can also be found on the side for locking down the Kensington Lock port along the left edge of the keyboard dock.

It’s been a little under two years since we first saw Toshiba tackle the hybrid laptop in a professional sort of way.

Back in the middle of 2013, Toshiba released the Z10t, a machine that boasted a hybrid form-factor comprising of an 11.6 inch tablet section and a keyboard dock, making for a laptop that could be both regular notebook and tablet.

When it came out, we liked what we saw, but the keyboard was too shallow and no battery was in the dock, making it a usable machine for on the go, but one lacking in much needed life.

For the Z20t, Toshiba has taken the Portege back to the drawing board, redoing the way it connects, what goes inside, and even how the keyboard dock works.

Let’s start with the design, and gone is the textured bronze brown of the old model, replaced with a charcoal grey and a look of brushed metal, made with magnesium. By itself, the screen is solid and yet fairly light at a little over 700 grams, while the machine with the dock doubles the weight and brings it to a little over 1.5 kilograms.

While neither are thoroughly hefty, Toshiba has managed to still keep the machine from feeling solid and well built, great for keeping it in the luggage and using it in all manner of places.

Next up is the screen, and Toshiba’s choice here isn’t as high a resolution display as what you might find in Microsoft’s Surface Pro 3, but it’s still a solid choice altogether.

Here in this 12 inch screen, you’ll find a resolution of Full HD, more than enough for a 12 inch, though not quite as strong as the competition, and down in pixels per inch compared to what Toshiba has previously offered in its Kirabook concept.

Where Toshiba makes up for this resolution difference is in the treatment to the screen, because there is no glare and no reflection in this panel making it viewable in practically any environment without diverting your attention to anything happening around you.