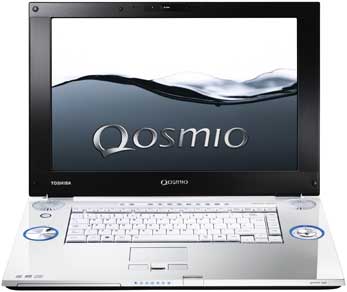 With its enormous screen and inbuilt HD DVD player, the Toshiba Qosmio G40 was really built to be the ultimate multimedia notebook. It’s chock full of high performance features and pretty much represents the best that money can buy in terms of multimedia. It also looks hella cool, with an ebony outer case, iPod white for the keyboard and chrome (with blue backlights) for the multimedia controls – including a funky rotary volume control and a touch-sensitive track control with an iPod-esque rotary scroll system.

To call it a portable, however, would be a stretch. The Qosmio G40 is huge – easily the biggest notebook we’ve seen, and not something you’d want to lug around on a day-to-day basis. In fact, the most you’re going to want to do with it is move it from room to room, or take it on the occasional road trip. We can guarantee you’ll never take it overseas with you.

Being one of the major backers of the standard, it’s really no surprise that Toshiba is the notebook vendor to come out with a product that has an integrated HD DVD player and recorder. While we were unable to test HD DVD-R recording (since HD DVD-R discs are pretty much non-existent at the moment), our test system came with a copy of Babel on HD DVD, and it was gorgeous on the 17 inch screen – a screen that is capable of displaying full 1080p video without downsizing or filtering. Combined with the integrated harman/kardon speakers, which are a cut-and-a-half above most notebook speakers, the Qosmio really is a self-contained high definition movie player – you don’t need to plug anything in to get a good experience with the notebook. That said, we’d still probably recommend external speakers or headphones when watching HD-DVD – there’s only so much notebook speakers can do.

If you want watch your DVD movies on a larger screen, you can. It has an HDMI port in the back for connectivity to LCD and PLASMA screens, as well as VGA and S-Video ports for output to non-digital screens.

The Qosmio G40 has another unusual feature for a notebook – an integrated TV tuner. Dual tuners, in fact, so you can watch one digital television channel while recording another. You need to plug in an external antenna, of course, but the tuners worked perfectly with Windows Media Center when we tested them (Windows Media Center is now integrated with Windows Vista Home Premium and Ultimate – the Qosmio came with the former installed). It even has a video line-in, so you can record from sources like Pay TV set-top boxes and VHS players.

If you’re into video calls the G40 has an integrated two megapixel camera and a microphone, which work well with video-capable software, including Windows Live Messenger.

For your more mundane connectivity needs, the G40 supports all the usual suspects: Ethernet, Wi-Fi, Bluetooth, USB. It also has a FireWire port, a flash card reader (so you can take the flash cards straight from your phone, MP3 player or camera and read them directly), and a fingerprint reader for security.

The G40 is driven by a very powerful processor – the Intel Core 2 Duo T7500 – and our test system came with 2GB of memory and 400GB of hard disk space. It’s also loaded with one of the most powerful graphics processors available for notebooks. It’s no surprise, then, that our test system ran as smoothly as any desktop. But then, the Qosmio really is a desktop, or might as well be, given its bulk and weight.

The size of the notebook affords it plenty of space for a larger than normal glide pad, along with neat multimedia controls. Large keys and copious wrist rests made it easy to type on, and the glide pad worked brilliantly. The G40 also comes with a proper Windows Media Center remote that, while neither pretty nor particularly well-designed, works better than the vast majority of remotes supplied with TV tuners.

If we were building a fantasy multimedia notebook, in which the sky was the limit in terms of price and features, then we’d probably end up with something like the Qosmio G40. It has everything – except, of course, portability.

The truth is, we’d rarely recommend a notebook for use as a media centre PC. Their performance and hard disk space tend to be limited and they typically require add-ons like TV tuners to make them work right. Not so the Qosmio G40, which performs extremely well as a media centre right out of the box. It’s not designed for somebody who likes to travel with their notebook – hell, the power supply on this thing seems to weigh as much as some entire notebooks – but if you want something that’s powerful, self-contained and stylish to work in your lounge room or study, the G40 most certainly fits the bill.