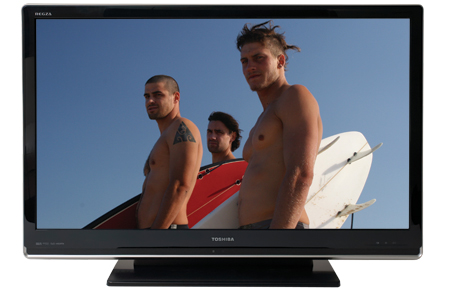 Toshiba has been hitting the TV market hard over the past couple of years, with several ranges of LCD TVs now available. The 94 cm REGZA 37XV500A is the smallest from the company’s premium range, so it has some pretty hot technology built into it.

This compact TV comes with a full high definition LCD display (1920 x 1080 pixels). The panel is backed up with some top-notch digital processing technology, including a dynamic backlight to stretch the effective contrast ratio, and motion processing we will discuss shortly.

The TV has a high definition digital TV tuner built in, along with an analog one. Perhaps the only notable item lacking is picture-in-picture.There are three HDMI inputs, with one of them conveniently located on the side of the TV – an increasingly useful feature given the HDMI outputs on some HD camcorders.

My first thought on connecting up this TV – after it had run through its auto station tuning – was whoah! The colour was way off; the whole thing was far too bright. That’s because of the TV’s default picture setting: ‘Dynamic’.

Do yourself a favour and immediately switch to ‘Standard’. This provides nicely accurate colours and excellent picture quality.

The TV tended to glow significantly when displaying a full black screen, especially in a darkened room. Having the ‘Backlight Control’ switched on made a marked difference, reducing the output of the backlight significantly during dark scenes to enhance the appearance of detail in black and near-black areas of the onscreen image. There remained a slight glow, even in this case, but the quality of the LCD panel was evident from the fact that the black level was completely even across its entire surface, with no hotspots.

This TV has some rather clever video processing. Extremely clever, and quite rare. As usual, the manual wasn’t of much help (the section, for example, discussing the TV’s ‘Cinema Mode’ option was actually quite misleading). It took me a while to work out what the TV’s ‘Film Stabilization’ does. It helps the TV deliver smooth motion even with an older Blu-ray player.

With high definition sources, or the built-in high definition digital TV tuner, there is an ‘aspect ratio’ setting called ‘Exact Scan’. This effectively switches off the picture scaling so that whatever is sent by your Blu-ray player, or other 1080i or 1080p source, appears unaltered on the TV screen. With this setting, you actually get to see everything on the disc. Other aspect ratio settings push the edges of the picture off the edges of the screen, but in the process they slightly reduce the clarity and sharpness of high definition video.

The Toshiba REGZA 37XV500A is a fine TV. If the size suits and you are after high quality, this deserves a close inspection.