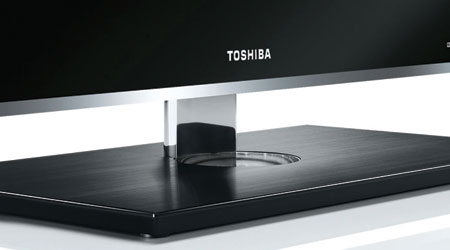 3D TVs are really starting to roll out of the high quality TV manufacturers now, with Toshiba joining the game in time for Christmas. It also has a 3D Blu-ray player out for Christmas too, if not quite in time for our deadline. Indeed, the Toshiba Regza 46WL700A TV was one of just two in Australia at the time of writing.

Of course it offers full high definition performance, and of course it delivers 3D. It has support for Blu-ray 3D (technically known as ‘frame packed’), and for the side-by-side format commonly used for broadcasting 3D TV. It also supports the up-and-down format. But it doesn’t have a process to fake 3D from 2D material, the absence of which I cannot bring myself to lament.

You get one set of 3D liquid crystal shutter glasses with the TV, with more available as optional extras ($129 each). The IR transmitter, required to keep the eyewear in sync with the TV picture, is built into the TV.

Designed by Jacob Jensen, the panel is beautifully thin, at just over an inch. A swivel stand is supplied with the TV. A set of touch sensitive controls are at the bottom right of the panel.

In addition to the usual range of inputs – the analog ones made via slimline adaptor cables, which are included – the unit has two USB sockets and Ethernet, plus built-in WiFi. All the inputs are at the back right of the panel.

The TV set itself up with a minimum of fuss, requiring the user to make a few selections, such as which State you are in Australia, and whether you want it to scan for both analog and digital TV, or only the latter.

After five minutes it was running properly, although I immediately changed a couple of the default settings. For example, even with 1080p content from Blu-ray, it used the ‘Wide’ rather than ‘Native’ setting. A key on the remote allowed a quick change, which resulted in the entire picture being presented on the screen rather than having its edges overflow the TV’s display into invisibility.

The colour was excellent, underpinned as it was by strong black levels. Watching the TV in a darkened room resulted in strong black levels most of the time, but with a very dark grey glow during mostly black scenes. While the TV did not quite match the extreme state of the art on this front, few would be disappointed.

The 3D TV performance didn’t match-up to the standard of 2D viewing. The TV had a penchant for warning the viewer of potential doom whenever a 3D signal was received. The main alert could only be switched off by arrowing down through a long block of text before reaching a line, which allowed this to be switched off, and to remain switched off. By default, another half-screen warning appeared whenever 3D was received, and required an ‘OK’ press to the remote.

If you find this troublesome you can drill down into the 3D setup menu, create a PIN for access to the ‘3D Safety Settings’ section, and switch it off. In the same area you can bar the TV from doing 3D at all unless the PIN is provided, and set up a timer to ensure that 3D is used for no more than a preset time.

As for the 3D effect itself, it worked quite nicely, but was diminished by crosstalk. That is, the left and right eye images, which are supposed to be quite separate to each other, tended to leak noticeably into the other eye, so there was clearly visible ‘ghosting’ much of the time, especially with darker objects on lighter backgrounds. In this regard, it was up with the best of the LCD TV 3D implementations, but lagged the 3D plasma televisions we’ve seen.

The TV has integrated WiFi in addition to the usual Ethernet connection. Using either you can get music or photos from DLNA servers on your network, or YouTube direct from the Internet. You can also get photos, music or video from a USB storage device. This last supported all my test DivX, AVI and MPEG2 files.

The Regza 46WL700A is a fine TV with all the features you could want, that also does 3D TV. It is up with the best in this regard among LCD TVs, but also shares with this company the crosstalk artefacting that more greatly affects LCD, rather than plasma, 3D implementations.

In our ratings we’ve made comment that the value for money from this Toshiba isn’t bad, but the Christmas promotion, available until 17 January 2011, makes it even better. This includes $1364 worth of goodies, comprising a Toshiba 3D Blu-ray player (BDX3100KY), three sets of Toshiba 3D glasses, one 3D Blu-ray title (Jean-Michel Cousteau’s Film Trilogy), and a Toshiba 22 inch LED Backlight LCD TV (22SL700A).

Can’t complain about that!