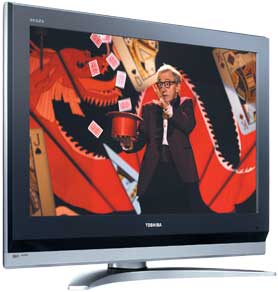 Toshiba has launched the first of its true high definition (ready) LCD TVs onto the Australian market in the form of the REGZA 47WL68A. I had to insert ‘ready’ because although the 120 cm (near enough) panel of this TV offers a full 1920 x 1080 pixels of resolution, there is no digital TV tuner built in.

That need not be a drawback though, because the price of this TV is quite good, so you ought to be able to add a standalone HDTV tuner.

The TV does have an analog TV tuner built in which can, I suppose, be used at a pinch. But I really don’t like the look of analog TV on a large LCD panel. Analog TV’s limitations become all too obvious.

With two HDMI inputs, adding a HDTV receiver is easy, and the picture quality provided with that is a great improvement. There is also a side-by-side picture mode so that you can have TV on one side of the screen and an external input on the other, or two different external inputs.

Toshiba has packed six speakers into this unit to provide the sound, and these are lined up underneath the panel so it doesn’t consume as much width as some models. It has also filled the TV almost to overflowing with advanced picture processing technology.

The only significant problem with this TV was the poor contrast ratio. It is rated at 1200:1, and the subjective results seemed to align with this. That meant that in any kind of dimly lit environment, dark areas of the screen look grey rather than black and that reduces the ‘punch’ of the whole picture. In a brightly lit room, though, this was not really noticeable and the TV produces sufficient brightness to produce excellent results there.

Where this TV did excel was in its video processing. First, using a HD DVD player and a test disc, I was able to establish that the TV would take the incoming signal and apply each of its pixels to the relevant pixels on the screen, so there was a perfect representation of whatever was on the disc, without any quality-degrading scaling.

Just as importantly, the performance of this TV with our good old-fashioned DVDs was magnificent. It has a host of picture processing options that eliminated defects and a top-notch scaler that produced a nicely sharp and detailed picture on the screen.

Even with interlaced video inputs it did a fine job, producing just about the best possible picture quality, with almost no nasty artefacts. The only times it failed were on the same difficult test clips that also trip up such processors as the highly regarded HQV (Hollywood Quality Video) from Silicon Optix.

I couldn’t really recommend the Toshiba REGZA 47WL68A as a ‘home theatre’ TV, because that implies turning down the lights and enjoying a cinema-like experience. The black levels just aren’t sufficiently low for that. But if you don’t turn down the lights, then the pricing of this TV may make it just what you need.