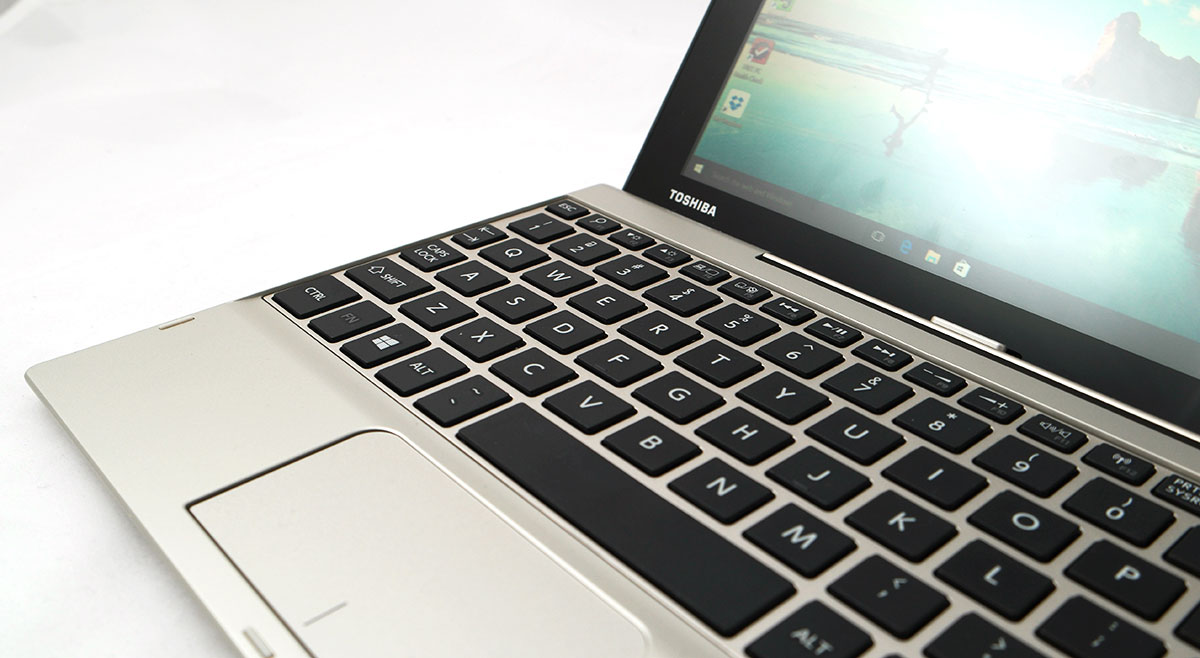 When you can’t decide between a laptop and a tablet, the hybrid might be the answer, and if you’re on a budget, Toshiba’s Click 10 offers up something that might work.

Priced at a hair under $700 for its recommended retail price ($699), Toshiba’s Satellite Click 10 looks to be at least on paper like a decent all-rounder.

The tablet-laptop hybrid does what all tablet-laptop hybrids do and throws the components in the tablet section, providing an Intel Atom x5 quad-core processor with 4GB RAM, 64GB storage, and a copy of Windows 10, supplying this to the 10.1 inch Full HD 1920×1080 touchscreen display.

Connections for this computer are fairly standard, with 802.11b/g/n WiFi and Bluetooth 4.0 rounding out the wireless connectivity options, while wired is catered for with a microUSB, microHDMI, and a microSD card slot all on the tablet section, while the keyboard section delivers two USB 2.0 ports.

The keyboard section also houses more than just a couple of USB ports, with the inclusion of a keyboard, a trackpad, and even a battery, handy to recharge that tablet and keep the computer running for a little longer.

By itself and in the tablet section only, Toshiba suggest up to nine (9) hours are possible for the Click 10 tablet, but with the keyboard section, this rises closer to around 15 as a maximum.

Out of the box and into the hands, it’s good to see Toshiba reviving a classic screen size for the Click 10.

Technically, the screen size of 10 inches has been one that was more or less relegated to computers made for students, kids, and the general purpose of education, particularly when it was made into a computer, as this small computer style has been seen as too small for most, especially when 11 to 13 inches tends to be the sweet spot for portable computing.

But 10.1 inches is where the Click 10 reigns, and it does so with a 10.1 inch Full HD display encased in a dull gold plastic, though we’re not sure we’d call this gold, either.

This isn’t gold and it isn’t silver, but it’s something in between, with Toshiba opting to call it “satin gold”, a title we’re not sure is fitting. It’s somewhere in between, so let’s call it “satin plastic metal” for the fun of it.

Ignoring the colour and its confusing title, you’ll find a wide spacious keyboard on the bottom section, a small but wide trackpad, and a push button to eject that tablet when you want to take the tablet solo.

Do that and the plastic tablet section departs from the rest of the body, providing a 550-odd gram tablet section with a nice screen, a few buttons, and a fairly soft touch.

All up, it’s fairly easy on the eyes, even if Toshiba hasn’t focused on quality materials for the Click 10.

Fortunately, there’s more to life than just worrying about whether the tablet is made of metal or more, and that’s where performance comes into play.

In the Satellite Click 10, you’ll find one of Intel’s latest generation of Atom processors, the quad-core x5 processor, which isn’t as high-end as what Microsoft has thrown into its Surface 3 tablet, but isn’t far off either.

In use, the combination of the Atom x5, 4GB RAM, and Windows 10 actually gets the Click 10 to perform quite well, with fairly speedy and snappy load-up times, with only a smidgeon of lag here and there.

For writing, web surfing, and productivity situations, the overall performance should be more than enough, with a good 40GB or so (a little less, actually) left over from the 64GB for you to use. Upgrading it is also pretty easy, with a microSD slot found on the left most edge.