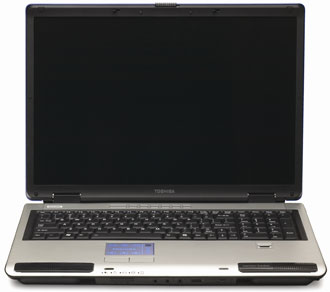 Once upon a time if you wanted to play games on a PC you needed to buy an ATX desktop tower. A huge, ugly thing that dominates your life and is almost impossible to move around the house if need be.

Those days are finally gone with the arrival of notebooks (really we should call it a desktop replacement) like the P100. Thanks to a combination of powerful dual-core processor and top-end graphics chip, this machine can handle pretty much any game you care to throw at it.

It’s packed with other features too, such as fingerprint security and handy shortcuts on the touchpad. This is a very complete system, and what it lacks in looks it makes up for in power and versatility.

The key to the power of this machine is the graphics chip. It’s an NVIDIA GeForce Go 7900GTX, one of the most powerful chips you can cram into a notebook. In desktop land, the 7900GTX is still pretty close to the top of the line, and accounts for a decent chunk of the P100’s price premium.

It’s interesting that Apple seems to be electing to use faster Core 2 Duo chips than PC manufacturers, because even this high-end notebook is still only using a 2.00GHz chip instead of the 2.16GHz unit seen on the lower-end MacBook.

Fact is, the 2GHz model is still very, very powerful and the lower cost means you get better graphics, a better optical drive, more expandability and Harmon Kardon branded speakers.

Luckily for Toshiba, the company has decided to make the most of the P100’s bulk. There’s a DVI video output, as well as SVGA and a composite TV-out plug too. Four USB ports also puts it ahead of the competition.

There’s certainly a lot of stuff that needs setting up on this machine. The fingerprint scanner is fiddly but seems to work once you get the hang of it (a tutorial is provided). Wireless was switched off out of the box, so to anyone struggling with this, look for the switch on the front of the unit! Bottom line is this is a Windows machine, so a familiarity with PCs will make set up much easier for you.

The performance of this machine is difficult to fault. Thanks to its very powerful innards, it chews through pretty much any task you put to it. The power of the graphics chip can’t be overstated in a PC of this nature, while the inclusion of 2GB of RAM means you rarely encounter slowdowns as the hard drive thrashes to keep up with virtual memory and pagefile demands. Impressive stuff.

We dream of a world with notebooks that are as powerful as the P100, but as pretty as, say, those from the Apple stable. It seems so strange that a machine this powerful has to be so plain in its looks. Still, it’s a long way from ugly. A desktop PC of this spec will be much cheaper, but it won’t be nearly as convenient. Even the battery life isn’t too bad. An impressive piece of kit.