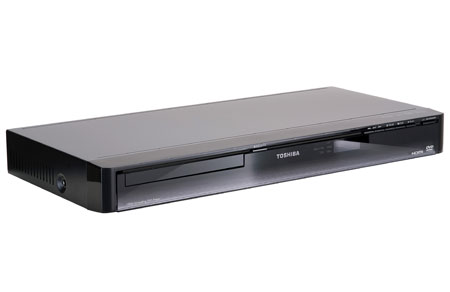 Toshiba it seems isn’t quite ready to take the plunge into Blu-ray, but as a co-developer of the DVD and the producer of some of the iconic early DVD players, it continues to push the boundaries of that format. Here we look at the company’s current top of the line XD-E500KY DVD player, along with its top of the line TV: the 132 cm Regza 52XV560A.

The DVD player has a bunch of video processing options, so that you can apply sharpening to the picture, tweak its colours and so forth. To make all this stuff stick, the unit offers upscaling of the video output, when delivered over its HDMI output, to a full 1080p. Furthermore, you can even set the output for US-type NTSC DVDs to the film-like 24 frames per second, which is a very rare, and very high-end feature.

The TV for its part also has some very fancy video processing which allows it to take plain ole US-style 60 frames per second video and turn it into 24 frames per second. So even if you don’t have this particular DVD player – or if you have a first generation Blu-ray player or still have an entry level HD DVD player (after all, HD DVDs were so cheap for a while there), you can use this TV to turn its jerky 60 frames per second motion to smooth 24fps motion.

The TV has four HDMI inputs, with one of them on the side with a bunch of conventional AV inputs, allowing ad hoc plugging in of video cameras. The styling of the TV is not as startling as some of the competition, but should fit with most decors.

The TV lacks the truly, deep blacks of the latest generation models from some competitor brands, but then it costs a couple of thousand dollars less that those offering the same screen size. In all but a very dark room, I found its black levels somewhere between adequate and quite good. The colour performance was excellent as well.

The digital TV tuner produced a good picture, but perhaps the most startling thing about it was that – aside from the excellent picture quality – it was hardly noticeable that it was digital rather than analog TV, because the station switching was very fast.

Likewise, the DVD player was fast and very responsive to the remote control. The only real letdown on the ‘interface’ front with either unit was the slightly out-of-date appearance of the menus and splash screens. These looked like they belonged on devices from three or four years ago.The DVD player’s front panel display showed only the current chapter number, which was of limited value.

As far as playing DVDs went, this system was either very good or brilliant, depending on the source. For PAL DVDs, it was usually very good. The DVD player would not deliver the raw DVD standard of 576i (interlaced) over the HDMI output, so performance was entirely subject to the unit’s built-in deinterlacing circuitry This performed a reasonable job at working out whether to treat the picture as video or film-sourced, but occasionally produced a little picture instability. The end result was to deliver a good quality picture, regardless of whether the output was set to 576p or 1080p. The colour was excellent, and the 1080p upscaling was excellent as well.

The conversion of NTSC DVDs to 24 frames per second output was of no particular use for most Australian DVDs, since our PAL discs are delivered at 50 frames per second. Indeed, its use was hindered a little by the review unit being locked to Region 4, which effectively stopped most of my US DVDs from working. However, Googling ‘Toshiba region free xd-e500’ soon gave an easily entered code to make the unit region free. With the unit set to ‘NTSC’ output in the main menu, 1080p output and with the front panel ’24F’ indicator going, it did indeed produce smooth, film-like motion on my US movie DVDs, although there were little stutters from time to time with a couple of discs. US DVDs are notorious for having incorrect ‘flags’ in their video streams as to their status, making it difficult for video processing circuits to work out how to assemble the frames properly.

The ‘Smooth’ setting for ‘Film Stabilisation’ in the picture menu of the TV did an even better job, even when the DVD player’s output was set to a regular upscaled 1080p60. In fact, doing it via the TV was the easier way to go because it avoided the need to switch the DVD player to NTSC-only output.

You may be wondering why this concentration on US DVDs. Well, my propeller-head nature got the better of me. This 1080p24 capability – both by the TV and the DVD player – is pretty ground-breaking stuff. Unfortunately it’s of limited value to most Australian video fans, for we mostly watch Australian PAL DVDs, or Blu-ray discs from players perfectly capable of delivering 1080p24.

Toshiba continues to strike out on its own with startling technologies that no-one else seems to contemplate. But in addition to this, both the TV and the DVD player provided very good all-round performance.

Of course, the DVD player isn’t a patch on Blu-ray, despite the good upscaling. But there are many more thousands of DVDs available than Blu-ray discs, and no doubt will be well into the future. It is well worth checking out if you need a new DVD player.